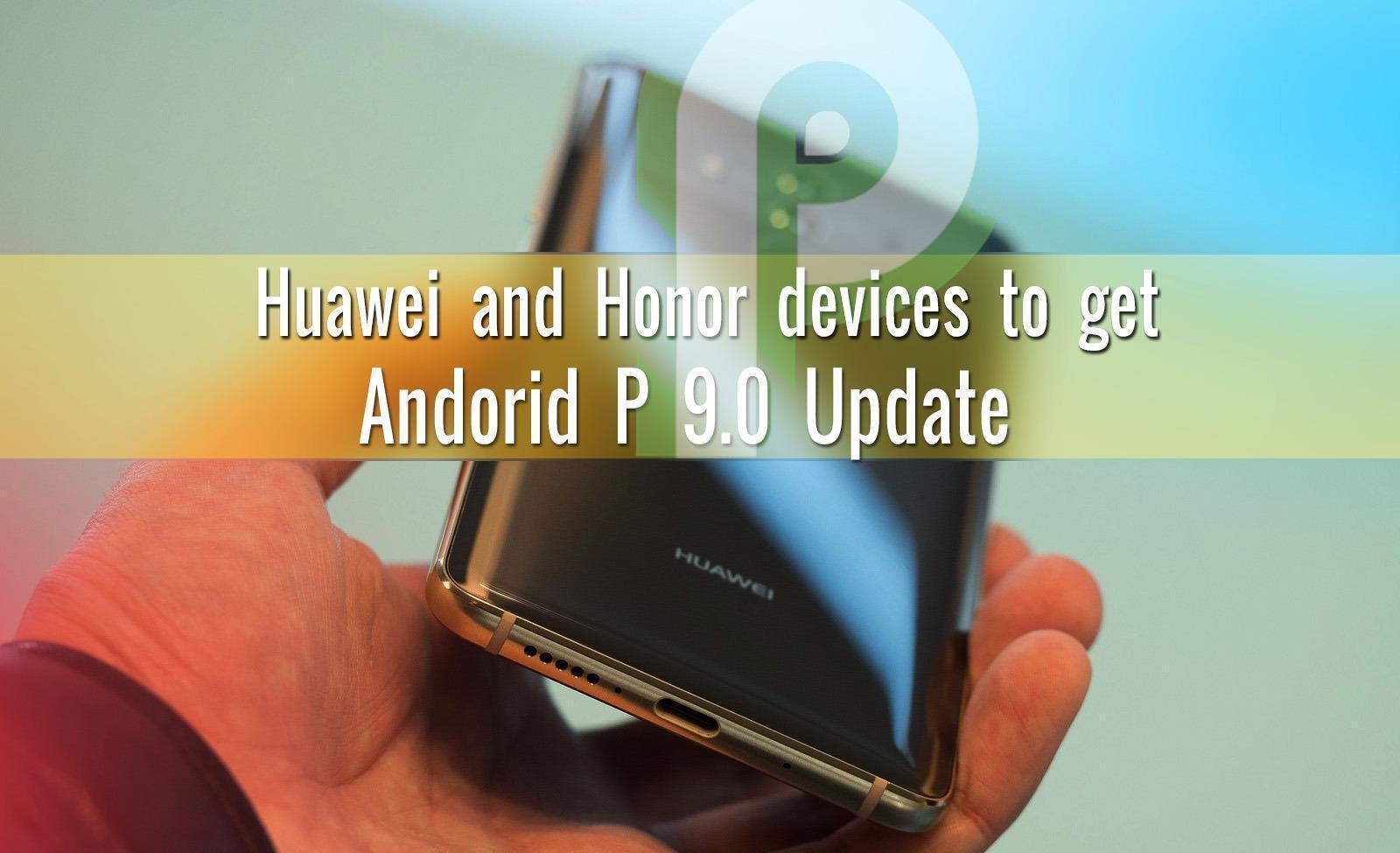 Android Pie 9.0 is now the latest version of Android and comes with a major overhaul over the last Android Oreo 8.1. Google recently gave a name to it, and the Android world has been talking about it since. The update is set to arrive on all the latest flagships and mid-range smartphones which makes the Android users wonder whether they will get the update on their phone or not. In this post, we are going to talk about all the Huawei and Honor devices that will be getting the Android Pie 9.0 update (EMUI 9.0 update). You can read the EMUI 9 update features and improvements here on the official Huawei blog post.

EMUI 9.0 mainly focuses on Gestures, AI Multitasking, and a new version 2.0 of GPU Turbo. Huawei with its EMUI 9.0 is also promoting DIgital Health and health monitoring. Some other features include Battery with AI Support, Notch Support, Adaptive Brightness, and a slight redesign of the volume slider as well.

February 2019: Here’s the new updated timeline for the Huawei Android 9 Pie AKA EMUI 9.0 update. The devices which are not in the below list have already got the update or running on the Beta EMUI 9 update programme.

January 2019: These Huawei and Honor phones have already got their EMUI 9 update, Some other devices are getting EMUI 9 Beta update and will soon get their stable updates. Honor 8X and Honor 8X Max will also get EMUI 9.0 based Android Pie update.

Update: Honor View 10 is now getting the latest EMUI 9 based Pie update in India, U.S., and some other regions.

According to the Huawei’s official Weibo post, the EMUI 9.0 update will be made available to the following Huawei and Honor models starting November 10:

China’s largest telecom giant Huawei also happens to be one of the largest Android OEMs, and now with the company making its way to the top 3 largest Android smartphone makers, everyone is hoping a lot from Huawei. The brand has improved a lot from since last year, by launching value for money handsets in each segment, however not each one of these devices will get the new Android updates.

The Chinese giant was also one of the first companies to release devices with that shipped with Android Oreo update out of the box.

Now, the Huawei Mate 10 and the P10 series and pretty much all the devices within that series should get the Android P 9.0 Update. And keep in mind that Huawei also has it’s own custom Skin and AI tricks on top of Android. So, the update for these current on-going flagships devices shall arrive by the end of 2018, or in Q1-Q2 of 2019 (Some old devices).

Huawei is rolling out the Beta EMUI 9.0 (Android Pie) update for some Huawei Mate 10 Pro units in Europe. The model numbers getting the update are the BLA-L09 and BLA-L29 versions, which are sold mostly in Europe. Also, the Honor View 10 and P20 Pro are getting the Beta Android Pie update in Europe as well.

There is no ETA on the update for other markets, but this news certainly expedites the update dates for other Huawei smartphones as well.

You can sign up for Honor India Pie Update program if you own any of the above-listed devices by filling out this form.

Now let’s take a quick look at all the Huawei and Honor devices that will get the Android Pie Update.

Honor has announced that EMUI 9.0 beta based on Android Pie will be available for the Honor 8X in China in late November, Honor 8X Indian variant will also get the Pie update after the beta testing.

Huawei P20 Pro was the highlight of Huawei in the year 2018. The smartphone comes in premium design powered with Huawei’s own Hi-Silicon 970 chipset along with that triple camera setup. The device will be one of the first Huawei devices to get the Android 9.0 Update.

The Huawei P20 is a pretty good smartphone, but it got overshadowed by its more premium model the P20 Pro. The Huawei P20 runs on the same chipset and will also be getting the Android Pie 9.0 update when the P20 Pro gets it.

The most affordable variant in the P20 series, the P20 Lite will also be getting the EMUI 9.0 update. The device comes with a HiSilicon Kirin 659 along with 4 GB of RAM. The device will most probably get the Android Pie update in early to mid-January 2019.

As we already talked about the Mate 10 Pro getting the EMUI 9.0 update in some parts of Europe. Well the Mate 10 Series will indeed be getting the Android Pie update soon, and a stable update is expected for Mate 10 Pro as well in December, or if we are lucky, even in November.

The device was launched alongside the Mate 10 Pro and will probably get the Android Pie update. The EMUI 9.0 update for Mate is expected to be rolled out in Q1 2019.

The Huawei Mate 10 Porsche Design Edition is still one of the most premium and expensive devices on the market. The device will be getting the Android Pie update in December 2018 at max.

The recently launched Honor Play smartphone might have been overshadowed by the like of Poco F1, but the device won’t be forgotten when it comes to Android Pie update. The device will be getting the EMUI 9.0 update in Q1 2019 for sure.

Being Huawei’s sub-brand Honor doesn’t enjoy the same delayed but complete flagship coverage of updates for its devices. By this we mean, the Honor 8 didn’t get considered for the Android Oreo 8.0 update.

Similarly, even though these devices mentioned above might indeed are eligible for the Android Pie 9.0 update, suppose the Honor 9 Lite was launched with Android Oreo out of the box and is a budget device and should get at least one major update. It still all comes down to Honor on where to throw their software development workforce. The Android Pie 9.0 update shall be arriving for these devices in Q1 of 2019, so it’s a long journey to go.

List of Huawei and Honor devices not getting the Android Pie Update (EMUI 9.0)

The Huawei Mate 10 Lite is a wild bet when it comes to Android Pie update. The device has a 50-50 chance of getting the EMUI 9.0 update. If Huawei is gracious enough to update the device to the latest version of Android, the update will arrive in Q1 2019.

The Huawei P20 Lite has more chance of getting the Android Pie update than the Mate 10 Lite, but still, there is a bit of doubt regarding the EMUI 9.0 update for the P20 Lite smartphone.

Huawei has not released any communication related to the EMUI 9.0(Android Pie) beta update aside from news that internal beta testing was going on with the Mate 10 and P20 Pro devices. The EMUI 9.0 will be released in the form of a public beta before the stable update is rolled out, so users of latest Huawei Flagships can expect an Android Pie Beta update in the coming few months.

With such a huge line up of devices in every category and its subcategory, it is impossible for a Brand to update all its devices and here we’re with more than eight devices that are will not get the Android P 9.0 update, while some of them are not even getting the Android Oreo 8.0 update.

However, the company will surely provide some essential security updates for these devices. Generally, this is what is said by the OEM when they don’t support a device for a major upgrade but continue to offer Security updates. Another reason that contributes to a device not getting the Android Pie 9.0 update is the fact that most Huawei and Honor phones run on the company’s custom Kirin Chipset, which might probably be the barrier.

Another sore rumor around the internet conveys that the EMUI 9 isn’t being able to run on mid-end Huawei and Honor phones, and we speculate the major reason behind this is the fast implementation of AI, with the next-gen chipset. Because with Android Pie 9.0 Google’s has opened up a new Neural network API for developers to experiment.

As updating drivers for the new version of Android is a tedious task and require a heavy investment of resources, which is diverted towards the flagship devices. This problem is partially solved by Google’s Project Treble which was introduced with Android Oreo 8.0.

This is it, for now, we’ll keep on updating as soon as more news surface about the Huawei Android Pie update.