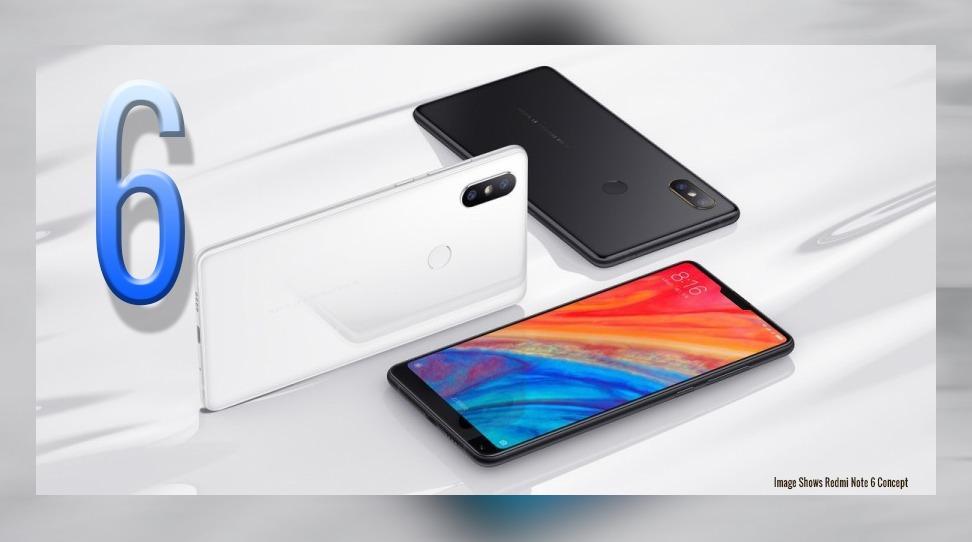 Xiaomi’s most successful line of devices is the budget Redmi Note series which sells in millions and has also been rated as one of the best selling smartphones in various countries. This tremendous success story started with the Xiaomi Redmi Note 3 which packed an upper-midrange chipset and was very affordable, after that the Redmi Note 4 came which was also a huge hit and currently we have the Redmi Note 5 along with a Redmi Note 5 pro which was premium offering from Xiaomi’s side. And now for the successor of the Redmi Note 5 which will be the Redmi Note 6 will arrive next year and everyone has a lot of expectation from it.

After continuing a similar type of design language over the past two years, it’s time for an upgrade and Xiaomi might bring the notch this time with the Redmi Note 6. An 18:9 aspect ratio is a good addition, however a notch display with an even taller 19:9 ratio and super slim bezels will be the name of the game with the arrival of the Redmi Note 6. However, do expect a chin at the bottom, as it’s going nowhere till Xiaomi employees a flexible AMOLED panel, which is impossible in this price range.

And as the trend is this day’s the Xiaomi Redmi Note 6 might also sport an all Glass and metal unibody design, on the Pro variant if not on the standard model. The fingerprint scanner being under the display is way too much expectation for a device of this caliber unless it gets common on most upper-mid phones. So, the fingerprint scanner might remain at the rear or might be mounted on the side.

Talking about the notch, Xiaomi will place its front camera or maybe camera’s, but as we have seen in the latest MIUI 10, that it doesn’t need Dual-Camera’s to employ the Bokeh effect aka Portrait mode on the front. So, a front firing speaker integrated within the ear-piece will be a good option for the Redmi Note 6. The display on the Redmi Note 6 will be a 6.1-inch 19:9 Full-HD+ LTPS or an IPS LCD panel and should come with Gorilla glass 3 or 5, with 2.5D glass and USB-Type C and headphone jack should also make its way on the handset. However, waterproofing will be a nice addition and will be first in this segment.

Xiaomi always plays the Specifications war and also every single time undercuts the competition and every time this strategy has worked in its favor and so will this time, no matter even if the profits won’t cross 5% or less. So, at the heart of the Redmi Note 6 will be the tried and tested Qualcomm Snapdragon 636 chip which is reasonably powerful Octa-core chip clocked at 1.8GHz. So, the Redmi Note 6 pro variant might have that, while going with the Snapdragon 625 for another year, might not be a good option. So, we think a Qualcomm Snapdragon 630 might be a better choice for the non-pro variant of the Redmi Note 6.

The memory department will be the same for the next two years or so, and we’ll get a 3GB/32GB model as the base variant, a 4GB RAM and 64GB model for the mid-tier and a whopping 6 Gigs and 64GB for the top buck. However, with the launch of devices such as the Oppo’s Realme One, a first in the class 128GB variant in a budget smartphone was also introduced for a well under 15K INR. So, Xiaomi might also choose to go the same route if the Realme One has done any damage to them.

Folks thinking about a Snapdragon 710 on the Redmi Note 6 should forget about it, as its too much to ask from a budget device. The 710 is present in Xiaomi’s mini flagship that’s the MI 8 SE, so think about the segment that device belongs to, which is related to the flagship family and an upper-midrange handset. While Xiaomi doesn’t skimp on sensors like Samsung, so the handset will come with all essential sensor as well as Xiaomi’s signature IR blaster.

To make the device a little more premium, Xiaomi should implement Dolby Atmos Audio or maybe a DAC for superior Audio via earphones or headphones, thus upping the deal in this budget segment.

With EIS support the Camera’s on the Redmi Note 6 will surely be a Dual Camera sensor, while on the front an 8 mp sensor could do the job for selfies. As a 16 MP snapper on the front means a direct threat to its own Redmi Y line, which is reserved for selfie lovers.

Usual camera effects such as the portrait mode, Auto-HDR, the panorama will be present along with some AR face filters as well. Moreover, the camera might also be powered by AI, so object detection and land-mark detection could also make its way on the Redmi Note 6.

AI-based MIUI feature will also be seen on the Redmi Note 6, while MIUI 11 could come in the future as well. But nothing above Android P Update should be expected, as Google is nowadays quite quick when it comes to releasing new versions of Android every year now. However, if project treble is involved with the Redmi Note 6, then this will change the entire scenario regarding major Updates for the device.

The same 4000mAH capacity power-pack or a slight bumped 4200mAh battery is also possible, with fast charging 15W or either 18W fast charging could be made available, out of the box. As far as pricing is concerned it will be priced similar to the Redmi Note 5 just a few $20 or 1.5k up or down should be considered. While the device will be unveiled in early March 2019 and it will be first launched in China before it makes its way to global markets.