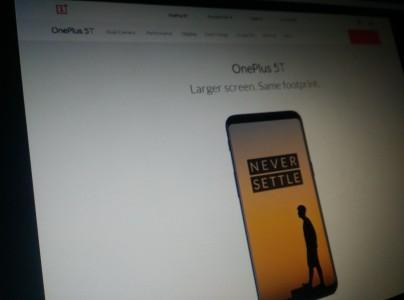 Earlier it was believed the OnePlus 5T will not come in production and instead of that they will be coming directly with the OnePlus 6. Then after a few days, some renders and invites were leaked which were claimed as fake because they were not from the OnePlus.Now finally a solid piece of information is there which confirms that OnePlus 5T is happening and will soon be announced officially. Let’s check out the leaked images and specs of the OnePlus 5T.

The leaked image belongs to OnePlus’s official website, and it is showing a device with a big screen and minimal side bezels. At the top, the name of the smartphone is mentioned as “OnePlus 5T” we are not yet confirmed that this happens accidentally or intentionally by OnePlus but whatever has happened is a kind of good news for OnePlus fans. The device will have an 18:9 Display rather than a regular 16:9 find on the current OnePlus 5.

This page is no more available on their website and is showing unavailable. The device is looking more dynamic and the tag-line says “Larger Screen. Same Footprint” which means that the dimensions of the device will be similar to that of its predecessor OnePlus 5. It looks like the device now got more curves and the aesthetics have been improved slightly. The device will run on the same Qualcomm Snapdragon 835(64 bit) Octa-Core processor clocked at 2.45Ghz coupled with optional 6GB/8GB of RAM along with an Adreno 540 GPU.

The Fingerprint Scanner on the device has been shifted to the rear above the logo and from the front space has been freed up for a 6.0(inch) Optic AMOLED 18:9 Display with a resolution of 1080 x 2160 pixels. The display is not the curved one but is similar to what we have seen on LG G6. No more specifications of the device are leaked, for further information stay tuned to us.