Whatsapp in its previous major update introduced a new feature which everyone was craving for since the beginning that is the ability to delete sent messages on the recipient’s side and the messaging giant just did that. However, the time slot to perform this deletion operation was very short at just 7-minutes after you hit the send button.

This short period of 7 minutes was unacceptable to many and tons of users again requested the messaging giant to increase the duration to delete a message. And now the good news is that Whatsapp has heard its users once again and it is being reported that the world’s largest messaging service has decided to increase the time to delete the message to 4096 seconds from now, that is 68 minutes and 16.1 seconds to be precise, which is well over one hour. 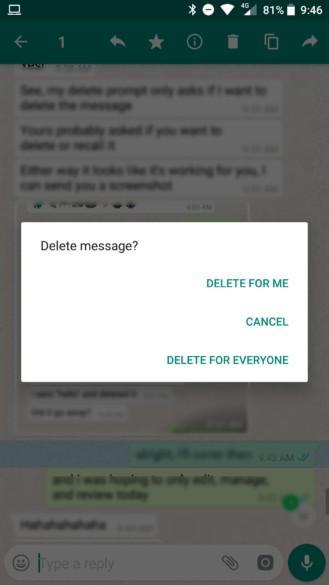 This enhanced feature is now being tested on the beta version of the Whatsapp on Android, so the iOS beta update hasn’t been landed yet. Moreover, as soon as the update has successfully passed the beta stage, it is expected to be rolled out in the coming 2 or 3 weeks.

Furthermore, as we reported earlier about Whatsapp taking measures to stop fake news spreading over WhatsApp by limiting the number of times, you forward it. And now along with that Whatsapp is also developing on a new feature that will allow the receiver to see the source of that forwarded messages as seen on the version 2.18.67, which seems like a step in the right direction. Another major feature will be UPI based payments via Whatsapp which will be a revolutionary add-on for Whatsapp. You can also download the latest version of WhatsApp APK from the below-mentioned link directly.