Qualcomm now has finally got it official that they are mass producing such samples which will be sent to Manufactures which will help manufacturers to test their device, these ultrasonic sensors can work under Glass, Metal, and OLED displays.

These type of sensors will help mobile phone designers to design the front of the device more sleekly. These sensors will be working with all the Qualcomm chipsets and some other platforms as well. 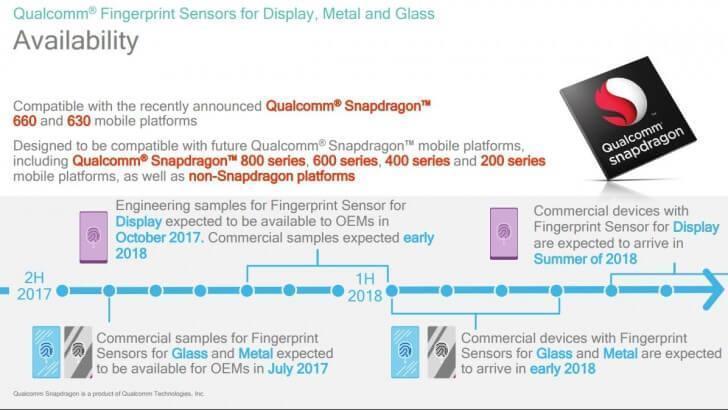 Vivo is the first mobile manufacturer to join hands with Qualcomm to showcase the ultrasonic fingerprint sensor, and it seems like it will be the first to get the devices to the masses available. Vivo made two prototypes to showcase the same, and therein one had the sensor under the Display, and another had it at the back of the metal.

Currently, the fingerprint scanner can scan through a 400 µm layer on top, while the new technology from Qualcomm can go up to 1200 µm on OLED panels and up to 800 µm on Metal and glass panels, the front glass covers a max up to 650µm.

There is the possibility of this type of technology that we can get the whole front screen to be a fingerprint sensor, which is a nice thing to be, but as far as the usability goes, it will work at just the bottom part and hence this is an excellent thing to be.

Qualcomm has sent the samples to the manufactures, and Qualcomm claims that they are going to get the device to the shelf for sale by 2018 Q1. Qualcomm also announced Snapdragon 450 at the same event in China.