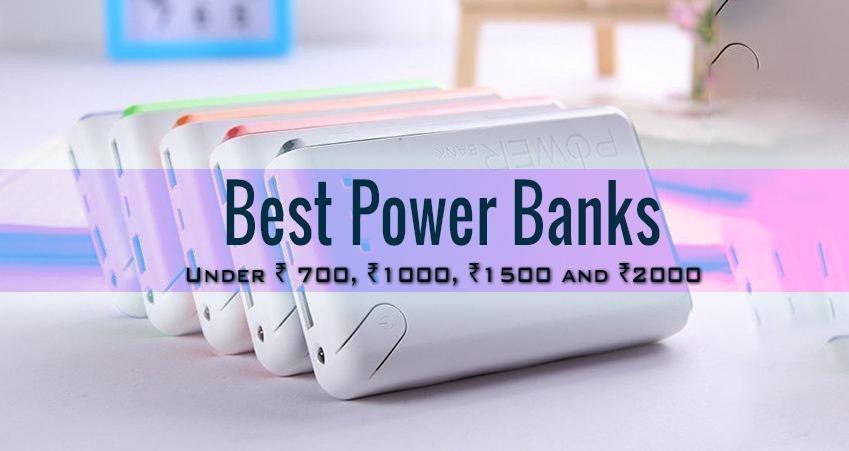 Smartphones have been struggling to get extra juice out of those tiny little batteries since ages now, and except fast charging solutions, we haven’t seen anything groundbreaking yet on the battery tech front. The traditional solution for this is to either find a wall-outlet for charging your device and the second option is to carry a power bank with you where you go. Powerbanks have become a must-have accessory for the last few years and selecting the correct powerbank for your phone can be a tiring job as there are hundreds of power banks available

So, in this post, we will take a look at the best power banks in each price category, say from the smallest top-up packs under Rs. 700 INR to larger 10000mAh packs under Rs.1000 to Rs.1500 INR to charge your phone multiple times. We have also included some stylish looking power banks from the likes of iPro and Intex and Xiaomi if you fancy your charging pack to look good.

Ambrane is a well-known brand when it comes to power banks, and the P-1122 Power bank is among the top sellers when it comes to best power banks for just 700 bucks, offering a massive 10000mAh battery capacity, with two output ports. This one weighs around 300g, so it’s not the lightest pack. Comes in various colors as well and retails for ₹699 INR.

Another best seller comes from the house of Flipkart; this one also packs 10000mAh juice. And has two outports and also weights around 300g. This one also retails for ₹699 INR.

Intex also makes some affordable power banks to quickly top-up your devices on the go, and this compact power bank with a capacity of 4000mAh is a good option to charge your device on the go without carrying a large hefty pack. This one retails for ₹499 INR and weights at just 122 g which is very light.

Another one from the house of Ambrane and this also feature a built-in 1 Watt LED torch light and packed a decent 4000 mAh capacity battery capacity and also has LED indicators. And retails for ₹499 INR and weights around 110 g.

This 10400mAh power pack can charge your device a bunch of times and comes at an affordable price of just ₹849 and weights around 345g. This one is built to last with its solid ABS Shell Casing built quality.

One of the most stylish and compact power banks and also the best seller of all time is the iPro 10400mAh pack, which weights at around just 212 g and is quite compact when compared to its competition. This one retails at just ₹999. Also comes in three different shades.

The iPro ip40 is currently on sale on Flipkart for about ₹799 INR, which is an absolute steal considering it offers a massive 13000mAh capacity which should charge your device for at least a 2-day cycle.

Lapguard is a new contender and its massive 13000mAh pack, the power bank weights around 309g and also includes a LED torch light. Moreover, also available in various colors but currently the yellow color option is available for just ₹699 INR.

This 13000mAh power pack is one of the best buys under Rupees 1500 INR and can charge your device numerous times in a day. So, a perfect companion for heavy users. It retails for ₹1,199 currently and weights at about 250 g.

This also features a LED torch light and has a total of three ports to charge from its massive 12.5mAh power pack. You also LED indicators as standard; this power bank also has a stylish wooden texture to it. It retails for ₹1099 only.

The Mi Powerbank 2i, on this list is the most premium and high capacity power pack, offering solid build-quality, two-way fast charging at Quick Charge 3.0 speeds. The exterior is made out of scratch resistant material. This humungous 20000mAh retails typically for 2K INR, but currently, Xiaomi is selling it for just ₹1499 only, which is an absolute steal. While the one with 10000mAh is also selling for the same price.

Ability to charge two devices this Syska X-100 packs a massive 10000mAh power to charge multiple devices at a time. But weights around 272 g so a little heavy compared to its rivals. Currently, the Syska X-1000 comes at about ₹1,145.

Syska’s massive 20000mAh power pack is one of the most affordable 20K packs under ₹2000. It has a solid build quality and is pretty slim for what it offers. It currently retails for just  ₹1,799.00 on Amazon.

Ambrane’s another powerhouse offering best in class 20800mAh of power at just ₹1699 INR. This one provides three ports to charge from and also comes with an LED torch.

All these Powerbanks mentioned will take well over 5 to 8 hours to charge your device, especially the ones with 10000mAh Plus capacity. While only the Xiaomi Mi powerbank 2i supports fast charging.