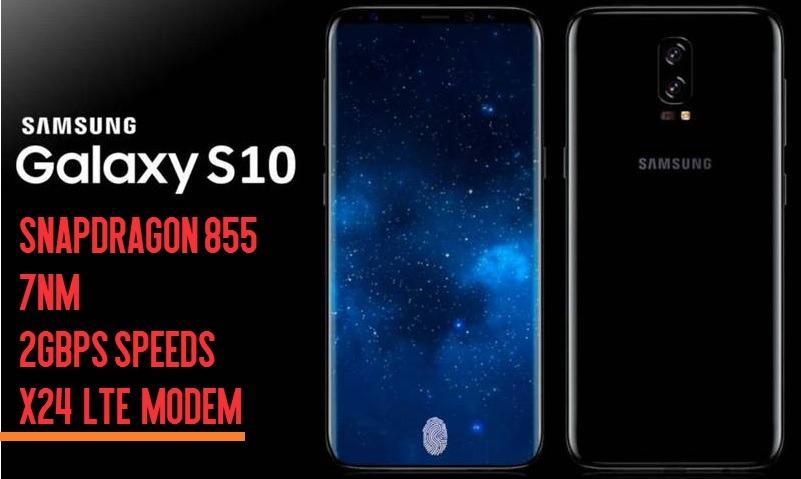 Samsung’s Galaxy S9/S9+ was just a mere refreshment or a refined version of the Galaxy S8/S8+. And so will be the upcoming Galaxy Note 9. However, the Galaxy S10 will mark the 10th anniversary of Samsung’s successful flagship in the Android market and can be a whole new device. Apart from being the most important Galaxy S flagship, Samsung Galaxy S10 has a lot to prove and is expected to offer something revolutionary.

As it’s competitors are rising with new ideas such as faceID, triple camera’s, Mods and better camera’s Samsung has been lately playing it pretty safe, similar to Apple. But with the Galaxy S10, everyone is expecting Samsung to pioneer something never seen before, which is going to prove quite difficult for the South Korean electronics giant.

In this post, we will try to explore and speculate all the new features that Samsung might introduce with the Galaxy S10. Based on all the rumors and leaks, Samsung plans to make Galaxy S10 similar to the Galaxy S3 and the Galaxy S7 regarding innovation which when debuted were a smashing hit and were seen as way ahead of their time, even though they weren’t.

To qualify for being a revolutionary device, the Samsung Galaxy S10 has to have that In-Display fingerprint sensor tech under it’s beautiful curved AMOLED display. Firms like Synaptics have already showcased the under the display fingerprint scanner with a concept Vivo device. However, the speeds of in-display fingerprint currently can’t match the speeds of the traditional one.  Even though the difference is just by 0.2secs to 0.3 seconds, that much amount of delay is not acceptable in a device of such caliber.

So, we expect Samsung to implement its own under the display fingerprint reader tech, which many rumors have already pointed out. The South-Korean giant might wait for the most refined version of this tech, but until that time almost every phone might be rocking the in-display biometrics. So, that won’t make the Galaxy S10 so special. Unless Samsung could make a faceID competitor.

Bezel-less front fascia, with a Notch?

Next, up on the list is shaving those top and bottom bezels, as the Galaxy S line already has a bezel-less display on the sides, it’s even better with a curved display. So now the only thing needed on the Galaxy S10 is to either shrink those top and bottom bezel. Shrinking either of the ones will not do the trick as Xiaomi, and many other Chinese OEMs are implementing such designs now. In the past, Samsung did file some patents regarding a design with a top cut out/notch display, but we’re not sure whether this will make into production anytime soon.

Snapdragon 855 based on Samsung’s 7nm process

Coming to the SoC, Samsung will also try to make similar performance gains or might even try to take on the Apple’s might A11 Bionic chip, teaming up with chipmaker Qualcomm on its Snapdragon 855. Which will be based on Samsung’s new 7nm EVU process, which now good enough to go for a consumer level device. However, reports also suggest it still can’t be mass produced, as Samsung’s Exynos 9820 in-house chip is not ready for the action yet.

But interestingly, some infamous tipster also pointed out that the company could also use that chip for the upcoming Galaxy Note 9, which would make it’s presence in the Galaxy S10 straight away obsolete if the Galaxy Note 9 gets its first. The Galaxy S10 has to be a pioneering device and should get all the latest and greatest hardware available out there as Samsung already missed this opportunity with Galaxy S9/S9+ by just upgrading the camera and internals.

Furthermore, there are rumors about the Snapdragon 855 based on Samsung’s 7nm process will have 5G capabilities and according to a Korean Publisher The Bell, Samsung has already planned to equip its new devices with improved antennas to make them 5G ready. So a Snapdragon 855 shall have the X24 LTE modem which will allow accessing speeds up to 1.2GBps.

The camera’s on the Galaxy S10, could come as a triple sensor unit, as more Android OEMs are running out of ideas on what to do with cameras after the craze of portrait shots phase out. Samsung already reimagined the camera on the Galaxy S9/S9+ with a mechanical variable aperture, so on the Galaxy S10, we will see the same trend continue with an Extra sensor for some excellent Hybrid Lossless Zooming abilities.

Apart from the specs and features, the naming scheme is believed to be also changed. But the Galaxy S10 can’t be named as Galaxy X similar to what Apple did with its iPhone on its 10th anniversary. Because major reports earlier pointed out to a foldable device named Galaxy X. Unless Samsung bringing in any Foldable features for the Galaxy S10, it won’t be using the X moniker for the successor for the Galaxy S9.

Galaxy S10 will surely touch the $1000 mark or more at least for the top of the line variant, and we might start seeing the arrival of 512GB internal storage variants as well. This might eliminate the sd-card usage, but we still hope the 3.5mm headphone jackstays on the Galaxy S10.

The Samsung Galaxy S9 was launched in March of 2018, while the upcoming Galaxy S10 is still a long journey from now. However, according to recent reports, it is suggested that the 10th-anniversary flagship from the house of Samsung, could be arriving much earlier than expected. The announcement is said to take place in late January 2019.

As the famous South-Korean Publisher, The Bell reports that Samsung’s suppliers will start delivering the components of the foldable galaxy Smartphone by this November. And Samsung doesn’t want to showcase both devices at the same stage, with one stealing the spotlight from another. Which obviously the foldable Galaxy X could easily overshadow, Samsung’s much important 10th anniversary of successful Galaxy S line.

So, it’s a good idea to have some room to breathe for each of the devices. So, a gap of a month or more than a month is much needed, thus the fact that the Galaxy S10 could be arriving much earlier to make room for the new innovative Galaxy X or the foldable Galaxy smartphone. Recently a new patent was also given to Samsung for a foldable device, which could apparently be the foldable Galaxy X. So, next year at CES 2019, we could see a Samsung flagship being announced for the first time as the company has really shown anything special at CES in recent years.

Moreover, this time with more credible reasons the Galaxy S10 might surely arrive a month earlier. And Samsung really wants to be the first to implement a much more refined and better version of the In-Display fingerprint scanner.

Samsung is always known for making the best possible devices on any smartphone, they’re so good that they also make it for Apple’s iPhone. The Samsung Galaxy S9+ with its AMOLED display can reach up to 1000+ nits of brightness which was thought to be possible only on IPS LCD displays. And now looks with the next Galaxy S flagship, that’s the Galaxy S10 is rumored to be equipped with a display which will be capable of pushing a resolution bearing 600ppi. The leak comes from a highly reputable source who goes by the name Ice Universe.

However, a 600ppi count is just an insane amount of pixels for a smartphone, as smartphone’s move towards taller 18:9 and now some even use 19:9 display the displays are getting massive reaching above 6-inches and still maintaining some compact dimensions. Remember the Motorola Nexus 6 with a 6-inch display, what a large device that was, how now even a Moto G has a 6-inch screen. Keeping this in mind the next Galaxy S10 to incorporate such dope levels of PPI needs a little more than 6.2-inches, or it might have to strip down on all bezels. However, it still won’t be able to achieve the all screen totality display dimensions.

Currently, the Galaxy S9+ sports a WQHD plus display, which comes at 570PPI do we are running low of just 30PPI. And with the elimination of top or bottom bezel, this can be achieved. Apart from that, this also means the silicon under the hood must also be top-notch, to handle them pixels. Overall, this could be the best display to be put on any smartphone, and Samsung knows display better than anyone else, so it won’t be that hard to pull off.