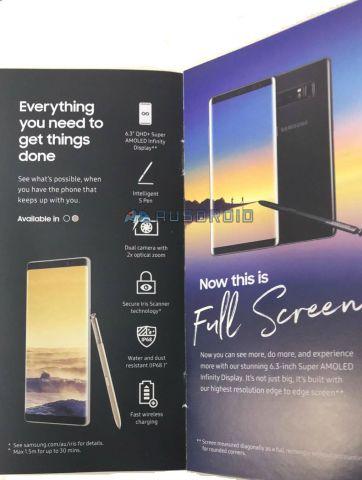 Samsung is going to unveil their mighty Galaxy Note 8 on August 23rd. The smartphone has already been leaked gazillion time, and everyone has a fair share of the idea about the upcoming phone. Countless reports have been spilling the specifications and feature it’s likely going to have. But now one such major feature was spotted in the brochures is about the functionality about the Note 8’s Dual-Camera setup.

The brochure says the device will sport a Dual-camera bundled with Optical Image Stabilization and a f/1.7 aperture sensor and its main functionality as per mentioned in the leaked brochure conveys a 2x optical zoom, and that’s it. Well if, that’s what it can do which many other smartphones already do. Furthermore, it isn’t much of a wow feature, and it’s pretty disappointing for the Note 8’s comeback.

Besides, this did Samsung only managed to replicate, what’s already present in the industry; no matter how good it is. Sure, there’ll be some other software trickery with the Dual-lens like artificial Blur mode. In fact, we have already seen such implementation, and it doesn’t look natural or realistic.

Moreover, the front is dominated by a 6.3-inches Infinity Display which will offer Samsung’s best AMOLED technology made yet. Along with the new intelligent Stylus, an improved Iris scanner for security. Also, it comes with Dust and Water resistant as well as fast wireless charging as per the brochures.

However, the Samsung fans will surely enjoy the return of the mighty Note series in all it’s glory, the smart phone already ticks the right boxes in the display and specs sheet department.