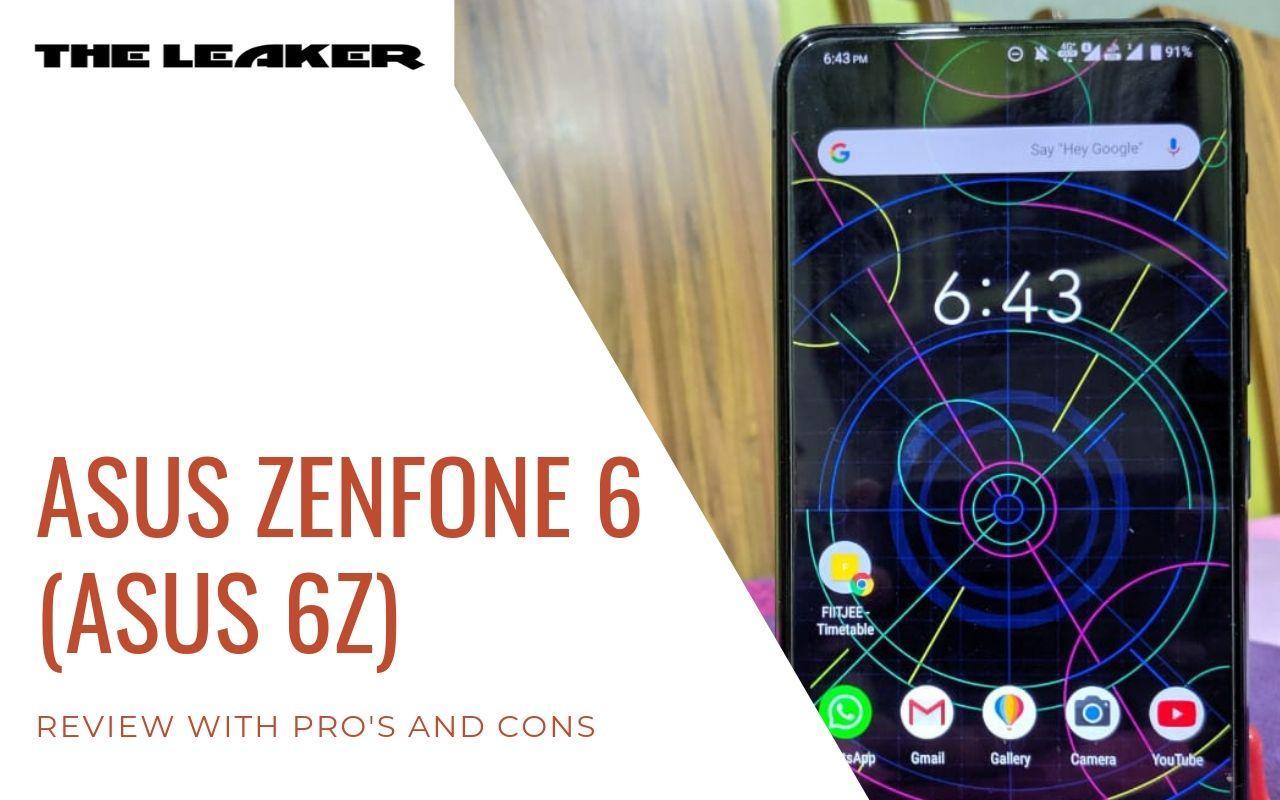 This is TheLeaker’s version of Asus 6Z (Zenfone 6) Review:

The Asus 6Z (also known as Asus Zenfone 6 in other markets) is Asus’s latest premium offering which offers almost all the features that a flagship has but at nearly the half price compared to other flagships. The phone has been hyped due to it’s freaking good flipping cameras which is the main highlight of the phone. The phone has many features that the current flagships lack and thus it stands tall beating other competitors such as the OnePlus 7, Redmi K20 Pro, and many more.

The Asus 6Z comes with a premium glass back covered with the protection of Gorilla Glass 3 on the rear, it looks clean and appears to be designed to look like a robot. The body is completely made out of aluminum and hence carries a heft with it. The phone feels premium and hefty in hand, but it’s still lighter than the OnePlus 7 Pro. The back of the device contains the flipping dual rear camera’s, a rear-mounted fingerprint scanner and a premium looking Asus branding in blue accents. While there is a point to be noted that the Asus 6Z doesn’t come with an in-display fingerprint scanner which looks pleasing to the eye’s, but the rear-mounted fingerprint scanner is highly fast and secure and gets the job done all the times.

The Asus 6Z doesn’t even miss out on any of the ports, as it includes the USB Type-C Port for charging and data transfer, a 3.5mm headphone jack which is missed out on almost all the flagships including the rival OnePlus 7, a stereo speaker setup and an extra customizable ‘Smart Key’ which can trigger multiple actions such as switching on/off the flashlight, switching between Do-not disturb mode, launching Google Assistant and much more. This key is a great time saver for me, as I use it to capture a lot of screenshots. The Power button has a blue accent to differentiate it from other buttons. Also, the Asus 6Z has a triple card slot so that you can use two sim cards and one micro-SD card aswell. The phone doesn’t have support for wireless charging, nor has an official IP Rating which is obvious considering this price point and the flipping dual rear camera’s. 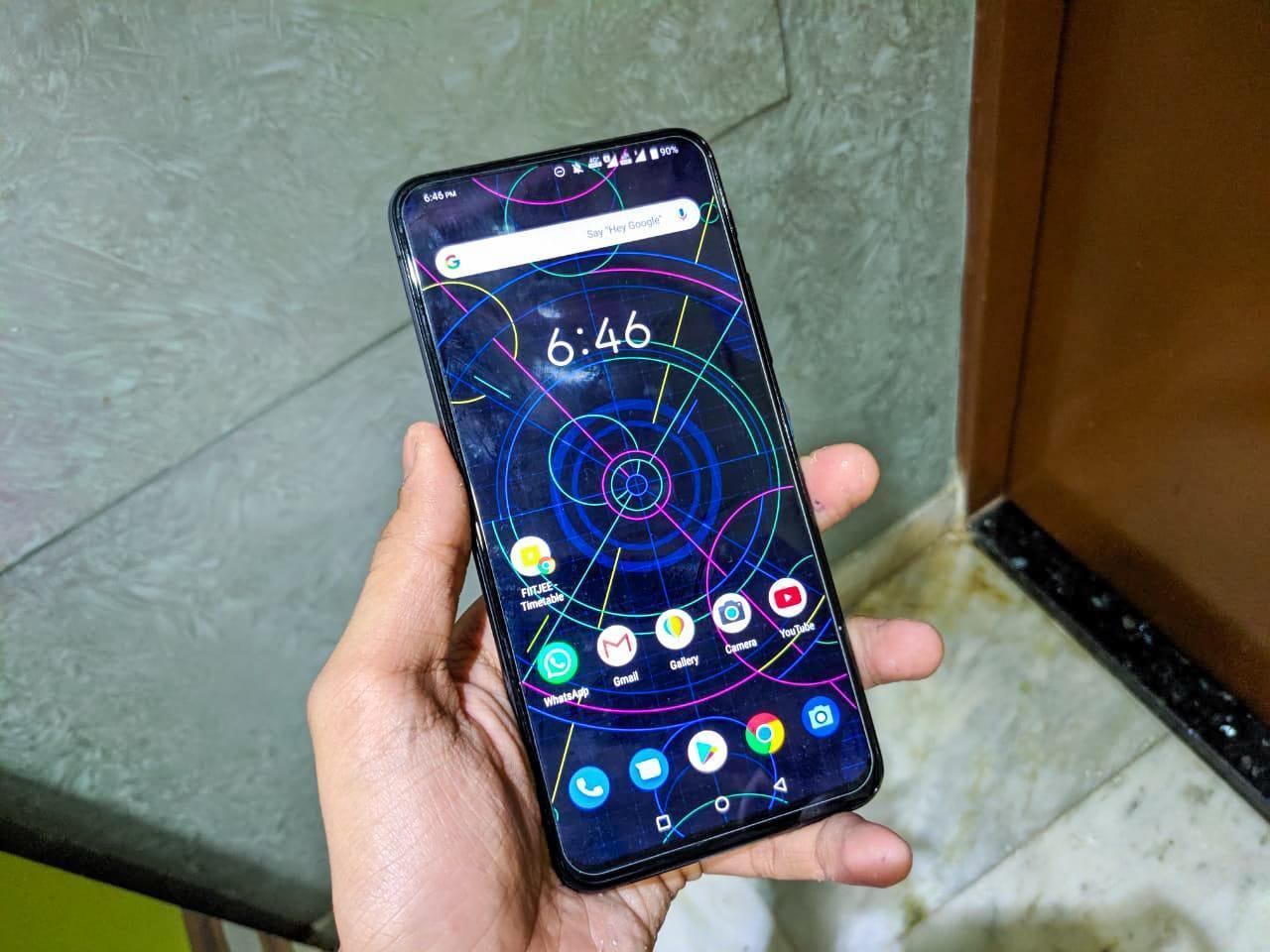 The Asus 6Z comes with a 6.4-inch FHD+ IPS LCD which is HDR Certified so that you can stream videos in HDR Quality on streaming apps such as Youtube. The most controversial thing about the Asus 6Z has been its IPS LCD display, while most phones in this price segment use AMOLED or OLED display technologies on their phones, Asus has gone with an IPS LCD display. The quality of the display is great, the viewing angles are good, and the display gets too bright as well (up to 600 nits). The display covers 100% of DCP-I3 coverage, stating that is can reproduce all the colors on the screen.

The display is protected by the Corning Gorilla Glass 6 and hence is more toughed and scratch-proof than previous versions of the glasses made by the companies. The phone doesn’t have any notch; instead, it takes advantage of the crazy flip camera to establish a full-view edge to edge display with a very tiny sized chin bezel. The phone sports Widevine-L1 Certification is ensuring that you can stream your favorite videos from providers like Netflix and Amazon Prime Video in FHD+.

When it comes to performance, the Asus 6Z destroys the phones just near its prices such as the Vivo V15 Pro, The Asus 6Z with its powerful and much power-efficient Qualcomm Snapdragon 855 Chipset and the Adreno 640 GPU can handle any tasks be it either massive games such as Fortnite or PUBG Mobile or day to day tasks such as calling and more without any difficulties. For those who are curious, the Asus 6Z can run PUBG Mobile at HDR with Ultra Frame Rates easily.

While the most concerning thing about the device to me has been its heating issues, Similar to the Asus Zenfone 5Z when taken the phone in hot sunlight the phone gets heated up rigorously without any tasks and if you play a lot of games, you will need to give the device rest for sometime every now and then as the Flipping Camera gets up heated violently. For those who believe on benchmarks, the Asus 6Z scores an score of 3,70,000 on Antutu beating the OnePlus 7, the Galaxy S10 Plus and is ranked at No.3 while the OnePlus 7 Pro claims the top spot. On Geekbench, the Asus 6Z Scores a score of 3,467 in single-core and 10,440 in Multicore. 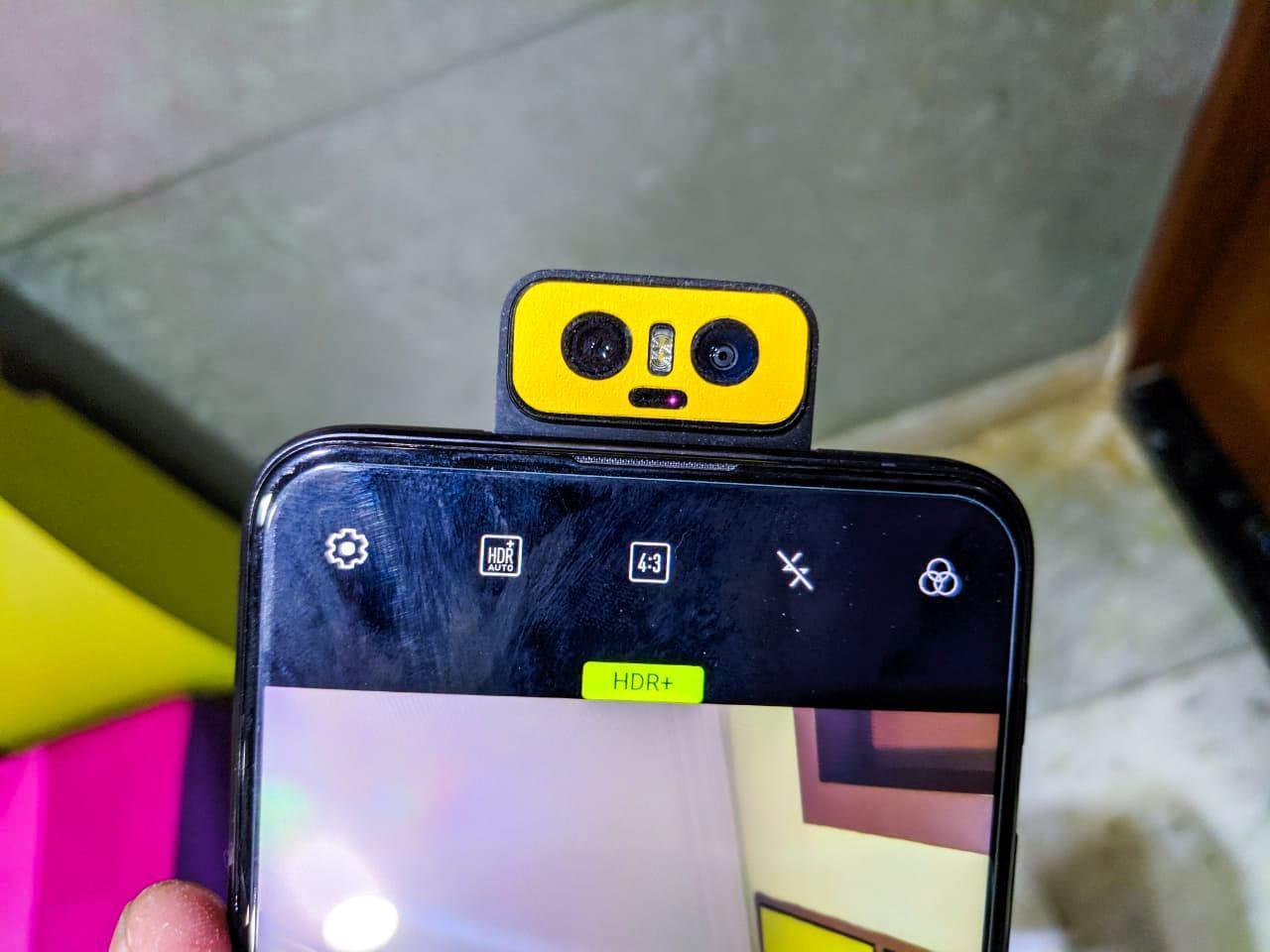 As far as the Camera’s are concerned, the Asus 6Z comes with a dual front and rear camera setup of a primary 48MP Sony IMX586 sensor with an aperture of f/1.79, this shoots 12MP shots by default by using pixel binning technology which combines adjacent four pixels to one to capture more detail.

The secondary camera is the 13MP Ultra-Wide Lens with a 125-degree field of view, laser autofocus, and automatic lens distortion correction techniques. The rear camera flips and acts as the selfie camera, and hence this becomes the first phone to have a 48MP Selfie Camera and a 13MP Ultra-Wide lens.

The rear camera flips at any angle between 0 to 180 degrees allowing you to unleash your creativity and capture some amazing and beautiful shots. The flip camera also provides the Asus 6Z some amazing features such as Auto Panorama where you just need to click a single button and the flip cae=mera automatically rotates 180 degrees and captures a wonderful panorama, a Motion Tracking Feature- which is a good tool for self vloggers allowing the camera to rotate with a locked focus and much more features. The phone can record videos up to 4K @ 60FPS and is ranked as the No.1 Selfie Camera by DxOMark Experts.

The phone shoots some fantastic pictures in day-light and even artificial lighting conditions but struggles a bit at Night, while there have been some improvements in the Night Mode after some recent updates yet there is a scope for improvement. The detail levels on the shots are high, the white balance is on point, and the color temperature is excellent as well. Refer below attached same shots for more details. 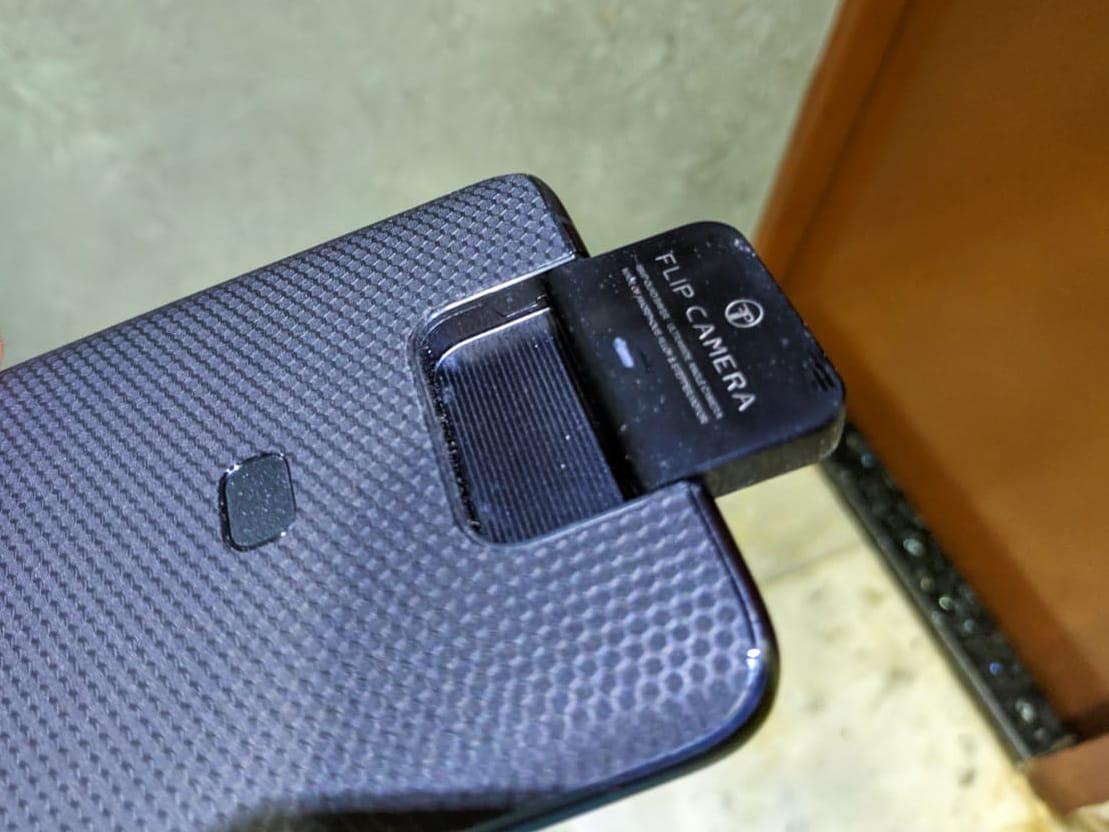 The Asus 6Z is the first flagship phone to ship with a massive 5,000mAH Battery, we had seen Asus do this on their budget devices, and now it’s even their on its latest flagship, the Asus 6Z aswell. While most of the users would expect a two-day battery life from this device, it somewhat doest meet the expectations from a 5,000mAH Battery, the average screen on time I used to get is about 7-8hrs and it lasted to me about one and a half day easily. The Asus 6Z comes with support for Qualcomm Quick Charge 4+ and ships with an 18W Fast Charger in the box as well.

Previously, Asus had been doing very bad with their old ZenUI 5, but with the introduction of the Asus 6Z, it brings a new Stock Android to feel to the User Experience with ZenUI 6 onboard. It brings all the features of Android 9.0 Pie which is seen on Pixel phones such as Digital Wellbeing and much more. Other than Android 9.0 Features, it brings some important features such as Optiflex which is used to improve app loading times, Game Genie –  to improve gaming performance, Twin Apps – to run dual apps of the same app, a new and amazing dark theme, and some great features.

The Asus 6Z is a fantastic value for money as it starts at $499 in Spain and 31,999 INR in India for the base variant of 6GB + 64GB, for this value the Asus 6Z is an absolute steal deal as it offers the best performance, a decently good camera, a stock android finish and much more. So if you are a person looking for a device under $500 and want a Stock Android Experience, the best performance with the Snapdragon 855 Chipset, a massive battery and excellent camera, we will recommend you the Asus 6Z.