OnePlus, the enthusiastic brand known to make flagship killer devices without digging a huge hole in your pocket might hike up its prices this year significantly. With new leaks coming from China’s famous publication ithome, who shared an image which shows the OnePlus 6 listed among other flagships with its price at a whopping $749 which is $150 to $200 more compared to its predecessor.

However, the variant listed in the leaked image is the top of the line 8GB RAM with 256GB storage which further cools down the price hike worries. That means the base variant of 64GB should be anywhere around $549 to $599, while the 128GB could cost $649 maybe? 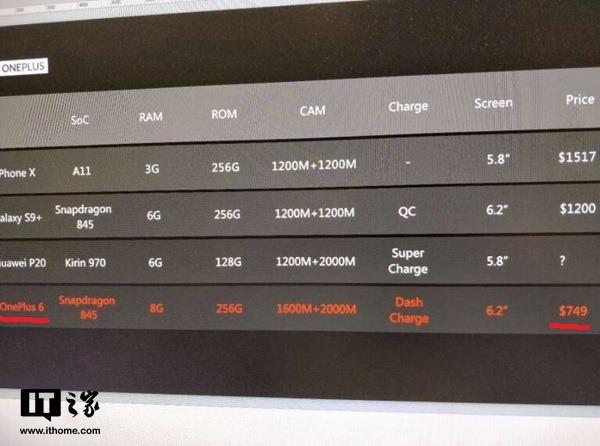 Apart from that, the OnePlus 6 is also said to have a similar design scheme to the latest Oppo flagship, which features a notch. While the rear on the oppo flagship looks quite similar to the iPhone X. This is where we think the OnePlus might differ or else the device will again be criticised for being an iPhone clone like last year, which isn’t a bad thing for most folks, but this will just make OnePlus look like any other Chinese OEM.

Moreover, the leaked image also shows the screen size to be at 6.2-inches, this means either 18:9 or a much taller 19:9 aspect ratio which we have also seen on the Asus Zenfone 5 2018 series. A Snapdragon 845 SOC, 6GB and 8GB RAM as always with dual-cameras one will be a 16 MP shooter accompanied by a 20 MP sensor.

Either way, this time around it is expected that OnePlus might probably go QHD with such a display on the front and also to be amazing at VR, it needs that high-resolution display for a good VR experience on the phone.