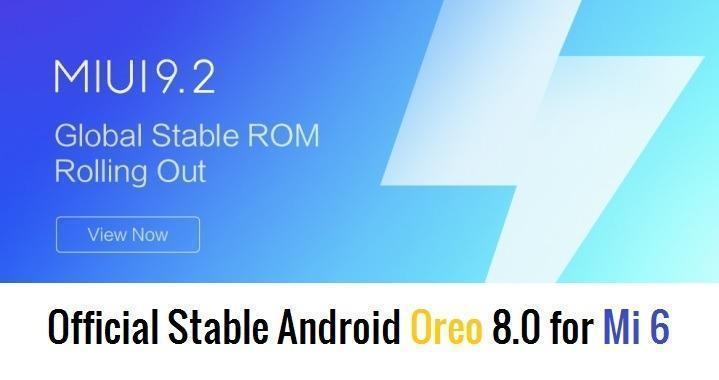 Xiaomi’s current flagship, the Mi 6 is finally getting a stable build of Android Oreo 8.0 after a long beta testing session. This thus brings the latest MIUI 9.2.3 Global Stock ROM for the device along with all the features baked into Android Oreo 8.0 as well as previously reported bug fixes and system stability enhancements as well.

The latest update is on the air, and it can also be flashed using the Mi flash tool, you can find all Download links here at Mi forums. Talking about the major changes, there are quite a few of them from major changes to the home screen to a wide range of bug fixes to the system, contacts, messaging app, lock-screen, notification bar, as well as for the themes of the devices.

Also, Check- List of Xiaomi devices that will get the Android Oreo update.

So, we can say a major overhaul can be seen in this new update, and as always make sure you have enough battery on your Xiaomi Mi 6 before updating. If you haven’t received this update’s pop-up yet then; head over to the updater app and check of the update manually.

Talking about the reports on what’s broken or what’s working, then there are some users complaining about the update being bad and still needs polishing. So expect a new update that should follow-up this current one. Lastly, its still unclear when the Mi 6 Plus will get a similar update.