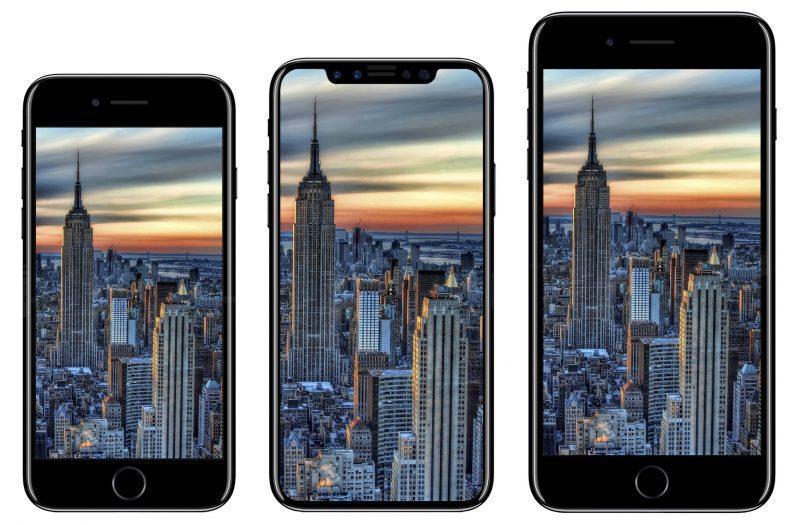 Amongst all the hype centered on the 8th iteration of the iPhone family, various leaks have indicated towards another set of devices known as the iPhone 7S and iPhone 7S plus, successors to the highly successful iPhone 7 series. These devices could become the best sellers of 2017, mainly because of the high price and low availability of the iPhone 8.

iPhone 7S and 7S Plus Design

The iPhone 7S and 7S plus could bring back the era of glass paneled Smartphones. Speculation suggests that the devices will sport glass back panels similar to the iPhone 4 and iPhone 5 series. Since glass does not block signals, there would be no need for antennae bands on the back, providing a seamless back panel.

Another key modification might be the removal of home button from the front, similar to what Samsung did with the Galaxy S8. The fingerprint scanner could come embedded in the power button, or it could have the same face recognition technology same as that of iPhone 8. Earlier leaks suggested a fingerprint sensor on the back beneath the Apple logo, the possibility of this design is also there. But the iPhone 8 will definitely won’t have a fingerprint sensor on the back.

Apple partner Wistron claimed that the iPhone 7S would have wireless charging, which complies with the glass used at the back. Apple could ramp up the waterproofing from IP67 to IP68, putting it at the same level as the Galaxy Note 8.

Rumors indicate that the iPhone 7S will feature a 4.7-inch screen while the iPhone 7S+ variant might go up to 5.5 inches which are the same sizes compared to the previous generations.

There can be a new color introduced a well; the rumors suggest debut of copper like color which is being called as ” Blush Gold.”

iPhone 7S and 7S Plus Specifications

Rumors suggest that the iPhone 7S would sport the latest A11 chipset based on the 10nm architecture. The chip will be faster than the A10 fusion processor. Considering the storage options, the iPhone 7S should come in 32,64GB and 128GB while the iPhone 7S+ may go up to 256GB variants.

An analyst from Cowen and Company points towards 3GB RAM as memory option while another source drops it to 2 GB configuration. There is no word on battery capacity yet, but it’s quite sure that OLED display and 10nm CPU architecture would give a boost to battery life.

The battery life is expected to be around 2000mAh for the 7s and around 3000 mAh for 7s Plus which has been pretty much the same since the iPhone 6 and 6 Plus.

The iPhone 8 could feature 4GB of RAM while the 7s and the 7s Plus may have to settle for 3GB of RAM only. Also, the leaks suggest 512GB of internal memory for the next generation iPhone which could again be an exclusive thing for the premium iPhone 8 model only.

iPhone 7S Plus and 7S Camera

Apple has always armed its iPhones with one of the best cameras in the mobile industry; catching up with the dual lens trend the iPhone 7S and iPhone 7S plus might be equipped with dual lens setup similar to many flagships. Early information points towards vertically mounted rear camera setup. The 7s model could also have dual camera setup this time around unlike the iPhone 7.

The specification and the letter ‘S’ in the name suggests that the device would serve as a bridge between the current iPhone 7 models and the upcoming iPhone 8. Both the devices will be priced lower compared to the iPhone 8.

The camera on the iPhone 7s devices could be less powerful as compared to that of iPhone 8. The iPhone 8 could have camera features like the live blur and manual mode which are present on the newly launched Galaxy Note 8.

Almost all the details of the upcoming device are known at this point of time, but still a lot of new leaks are coming in every day, According to Forbes the wireless charging has been confirmed for the 7s series iPhones and also both of these devices that are the iPhone 7s and iPhone 7s Plus will be bigger in dimensions than their predecessors, although the change will only be of a few millimetres and most of the users won’t even notice it but every change seems intriguing at the moment.

Apple has packed a lot of technology in this years iPhones so it seems a bit hard to deliver the phones in the same package, Apple is proud of iPhone’s dimensions and likes to keep it devices sleek and slim so it would be interesting to say what Apple has to say about this, as the company has been making the iPhone slimmer every year.

The iPhone 8 model will be priced higher than the S series and also availability issues will be there in the starting.

MUST READ: iPhone 8 Vs Galaxy Note 8 Vs. Galaxy S8 Plus Vs. LG V30 Ultimate Comparision

In India the device would go on sale in October, the device will be available via major E-commerce websites and also via official Apple resellers present in the country.