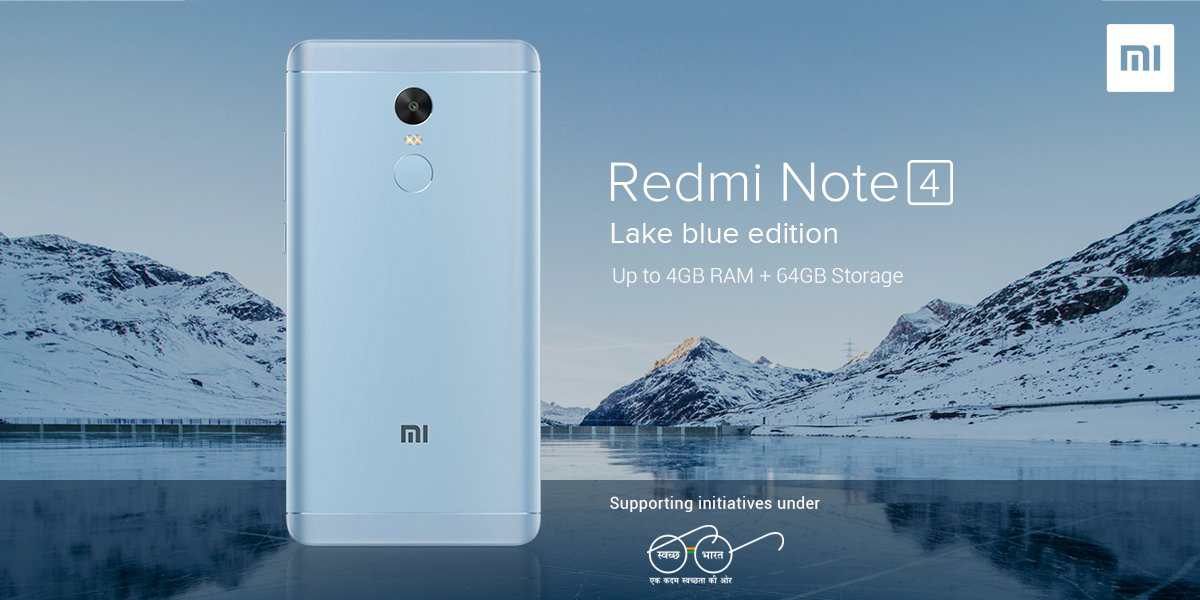 Recently Xiaomi India has shared an image on Facebook about what new color shade will suit the Redmi Note 4, and today they have announced a new Blue Lake version of the device. The highlight of this new color is that this edition of the phone is in support of “Swatch Bharat” campaign. Xiaomi has also said that a part of earning collected from the sale of this device will be used for Swatch Bharat campaign. Anyway, let’s take a detailed look at its specifications and pricing.

The device comes in a new Blue Lake color which may be liked by some people, and it has front bezel part in the white color scheme which according to us doesn’t look that much appealing, but it’s subjective. Other specs are almost similar to what we have seen in the other variants of the Redmi Note 4. It is a Dual-SIM device and supports 4G connectivity. This version will only be made available in 4GB RAM and 64GB internal storage variant which you can expand as it has a Hybrid SIM Tray.

The phone comes powered by a Qualcomm Snapdragon 625(64 bit) Octa-Core processor along with an Adreno 506 GPU for Gaming, nothing new in the performance department. In the front, there is a 5.5(inch) Full HD IPS Screen with a resolution of 1920 x 1080 pixels, 2.5D Curved Glass. The phone runs on MIUI 8 based on Android 6.0 Marshmallow. The phone has a 13MP rear Camera that can record Slo-Mo videos and has PDAF technology while in the front, it has an 8MP shooter for selfies.

The phone has a massive 4100mAh battery and is priced at 12,999 INR. Regarding specs and software, it is similar to that of the earlier launched Redmi Note 4. You should consider it if you want to contribute to the Swatch Bharat Campaign. Xiaomi is also expected to launch the successor of this series, the Redmi Note 5 shortly.