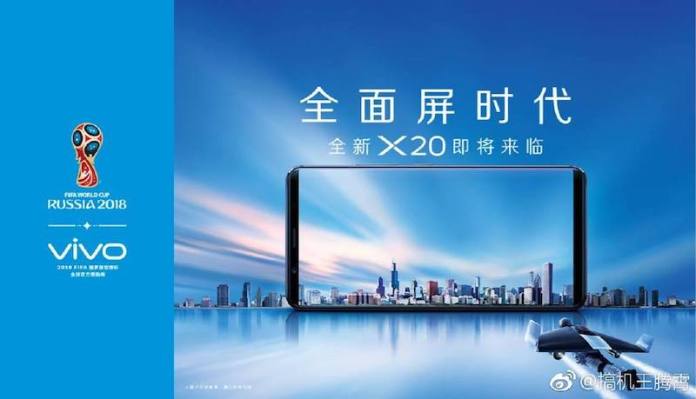 Earlier we have posted an article regarding the leaks of the upcoming Vivo X20 smartphone. Recently some more images of the smartphone got leaked in which; a device is visible with a white colored front bezel part as seen in most of the Vivo devices, earlier it was spotted on the FIFA 2018 promo posters. If you don’t know then, Vivo has signed an agreement with FIFA to be the official sponsor of the game. Anyway, let’s check out the leaked information of the device.

In the pictures, the device is spotted in White color, and as previously rumored the handset in not completely bezel-less it has minimal side bezels but retains the top and bottom bezel. The fingerprint scanner will be present in the rear of the smartphone. The device is not visible, but it appears to be a metal body handset. The phone also has a Dual-Camera setup in the rear which may be able to take portrait shots similar to that of the Moto G5S Plus.

It is also rumored the device will be available in two variants: Vivo X20 and the X20 Plus. The phone will come with the ROM capacity of 64GB which will be expandable up to 128GB’s. As visible in the images, the device has a single front camera for selfies. Vivo X20 will offer a 5.0(inch) Full HD screen while the X20 Plus may come with a 6.0(inch) Full HD Display. As per rumors powering it will be a Qualcomm Snapdragon 660(64 bit) Octa-Core processor coupled with 4GB of RAM. No official information about the device is there, but Vivo might launch this in the current month.