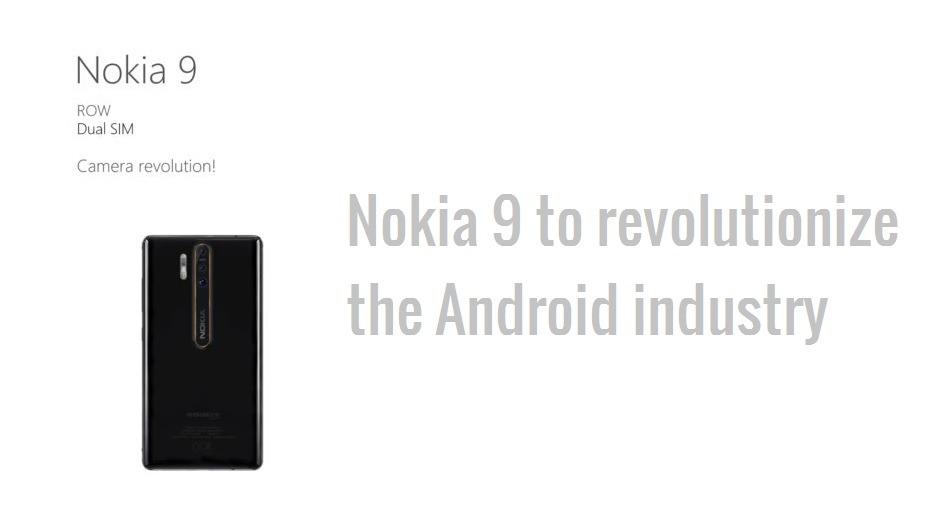 We earlier reported about the existence of another high-end Nokia flagship, which is rumored to be the Nokia 9. The device has been in leaks for months, and now we have spotted some new details about the device.

Starting with the display, we have a massive 6.1-inch with the trendy 18:9 aspect ratio featuring an AMOLED panel which will come with a QHD resolution. Under the hood the Nokia 9 is said to pack the top silicon from the house of Qualcomm, that’s the Snapdragon 845 which is an Octa-core chip based on its custom Kyro 385 CPU’s and is clocked at 2.8GHz. The Snapdragon 845 is paired with a whopping 8 Gigs of RAM in Nokia 9 and has a humongous 256GB of internal storage as well.

The device also comes with IP68 ratings which means it is water and dust proof and keeping the device alive is a massive 3900mAh battery. However, the most interesting thing here is the camera which takes a lot of influence from the legendary Nokia Lumia 1020. Nonetheless, Nokia 9 will also have an in-display fingerprint sensor making it the first commercial device to do so.

The Nokia 9 will come with the Triple camera’s powered with Carl Zeiss lenses, the first one is a 41-megapixel wide angle shooter with a variable aperture similar to the Galaxy S9 Plus, (f/1.5 to f/2.4), the secondary sensor is a 20-megapixel Telephoto lens with a f/2.4 aperture. Both the first and second sensor are assisted with OIS. Finally, the third sensor is a 9.7 MP Monochrome unit. Plus you also get Xenon flash with them. On the front 21 MP with a f/1.8 aperture is present for all your selfies.

Furthermore, the device will get updates regularly, as it will be a part of Google’s Android One project. Also, it supports Qi wireless charging with Qualcomm Quick Charge 4.0 speeds. The design looks inspired by the Nokia 8 Sirocco with a Ceramic backplate finished with 18 Karat gold. Overall a very promising device as it sounds on paper and we can’t wait to explore more about it, on the leaked promo image Nokia 9 has a tagline of Camera revolution and on the spec sheet it also seems like one. However, take this info with a grain of salt, until more information comes out, adding credibility to this.

Lastly, we also have the Huawei P20 Pro smartphone featuring triple cameras which was launched recently and also the upcoming Motorola Moto Z3 2018 rumored to have a triple camera setup as well along with the Moto-Mods Camera attachment to blow away its competition.