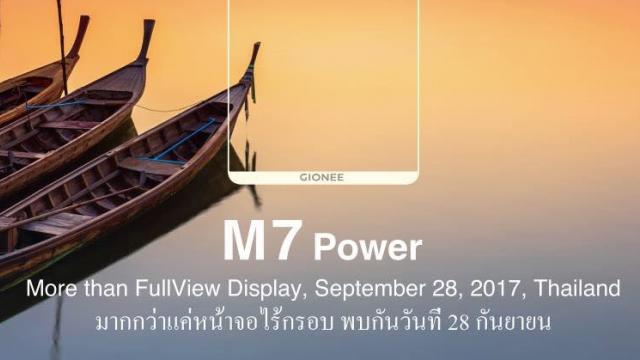 Gionee a Chinese brand was silent for a while, but now a recent leak suggests that Gionee will soon be going to launch M7 Power smartphone. All brands are moving towards Full vision bezel less display and following them Gionee will soon introduce its bezel less screen smartphone. The image shows that the phone will have some bezels on top and bottom while side bezels will be minimal, anyway, let’s check out the leaked and expected specifications of the phone.

Gionee M7 Power will be a Dual-SIM smartphone and will offer 4G connectivity. The phone was spotted on the Geekbench as well, and the listing also revealed some of its specifications. Leaks have revealed that the phone will come powered by a MediaTek MT6757CD processor clocked at 2.6Ghz coupled with 4GB of RAM and for Gaming, it will house a Mali-T880 GPU. The phone may come with 64GB of internal storage expandable up to 128GB’s via micro-SD card. It will run on Android 7.1 Nougat and will get the Android Oreo update.

In the front, it may come with a 6.0(inch) HD+ IPS Display with a resolution of 1440 x 720 pixels, minimal bezels. The phone may have a 16MP rear camera while in the front, it will have a 5MP camera for selfies. The phone may run on a 4000mAh battery. Further information about the device is not available as of now, but it will compete with the existing Chinese brands like Coolpad, Vivo, Oppo, Xiaomi, etc. From the specs, it appears to be a mid range device.