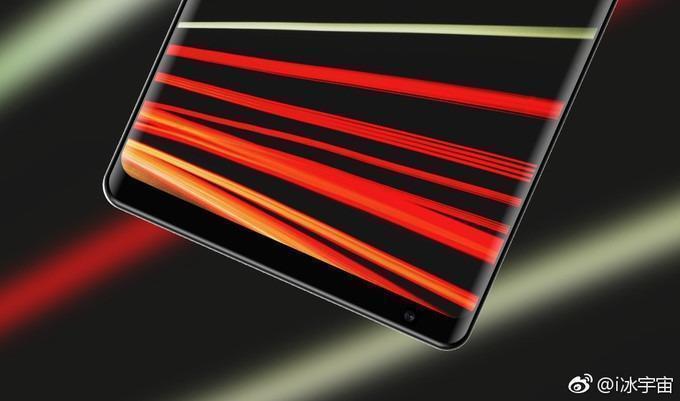 Xiaomi Mi Mix 2 is about to be launched in a few days, and the leaks for the device intensifies as a new leak emerged giving us our best close up look of the smartphone yet. These new renders showcase the massive bezel less display. And looking at the pictures, we think this thing will achieve the highest ever screen-to-body ratio, ever on a smart phone, which is insane for a Chinese OEM pushing the design boundaries.

There’s still no symmetrical look, as we can see one side has the front camera housing while the other top front has nothing but an endless edge, the display from the looks of the pictures seems to have the new 18:9 aspect ratio and is curved around the vertices. Now only thing remains to be seen, whether these images of the device are upside down or the other way around, as the phone is only partly visible in both renders.

Thought we couldn’t say how curved the display will be but we think there’s a subtle curved at the edges, like the recently launched LG V30. Xiaomi is also expected to pack the new Mi mix 2 with the latest Qualcomm Snapdragon 835, which is now present on every major flagship so will run the show here. Along with 4GB RAM and 64GB expandable storage.

Moreover, the display will be similar to the likes of Galaxy note 8 maxing out six plus inches. There’s no information yet about the resolution whether a Quad HD panel or a Full HD, so we’ll wait and see what the next batch of leaks suggests about it. While on the camera front a 13 mega pixel selfie snapper is in the cards, but nothing about the rear shooter is seen for the time being.

We expect Xiaomi to bring such design for its mid-range devices as well if not its budget phones, which will also intimidate its rivals to bring the same design and ultimately the consumers will benefit from it.