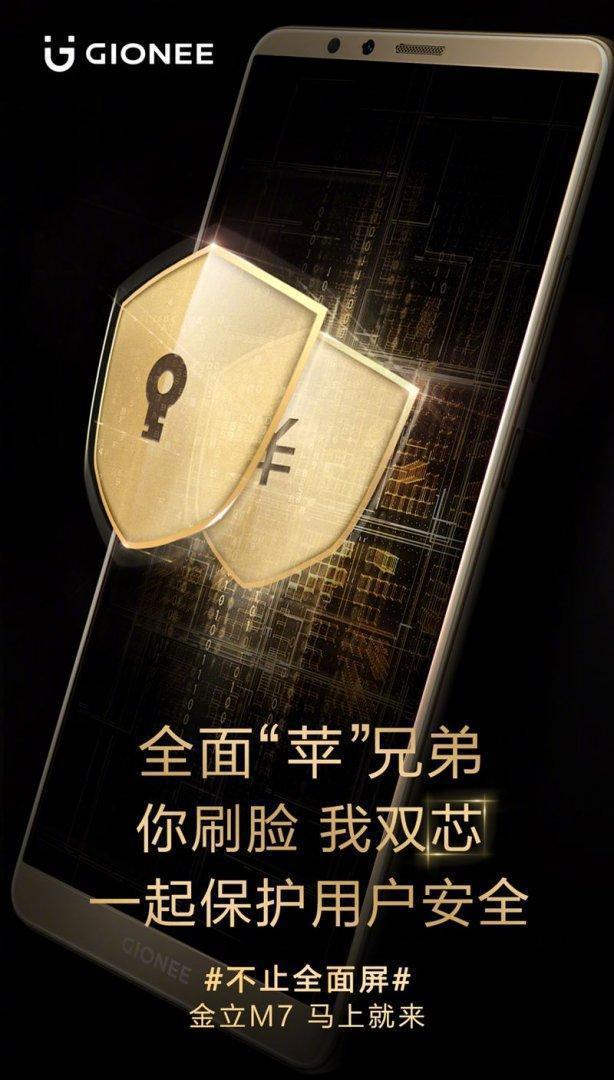 It’s raining bezel less everywhere, the new iPhone X, Essential phone, Galaxy Note 8, LG V30 and every other OEM is jumping on the edge-less bandwagon! And so is not Gionee, with their upcoming M7. A fresh new leaked render shows the Gionee M7 in its entirety, but only from the front with the new 18:9 aspect ratio.

The display here is a 6.0-inch Full-HD panel, with almost no to minimal bezels on the sides. Even though we still have noticeable bezels on the top with houses dual-front cameras as well as the ear piece and bottom where the Gionee branding sticks. And according to GFXbench M7 gets powered by a MediaTek MT6757CD SoC which is a 16nm Helio P25 Octa-Core processor. It’s most high-end in MTK’s portfolio with best in class image processing.

Paired with a Mali-T880 dual GPU, with that said this an upper mid-range; and will compete with the likes of Galaxy C7, C9, Moto X4 and similar. Furthermore, the M7 packs 4GB RAM and 64GB ROM with room for expansion. Gionee is never known for its OS updates, and here we can see that it runs on Android 7.0 Nougat.

This is the company’s first step in the bezel less category, and we would like to see what more it brings to the table. If priced at around $300 or $349 for the 4GB/64GB variant we could have a winner here. But it might face fierce competition from the upcoming Android One smartphones from HTC with its U11 life. And the Moto X4 Android one devices from Google.