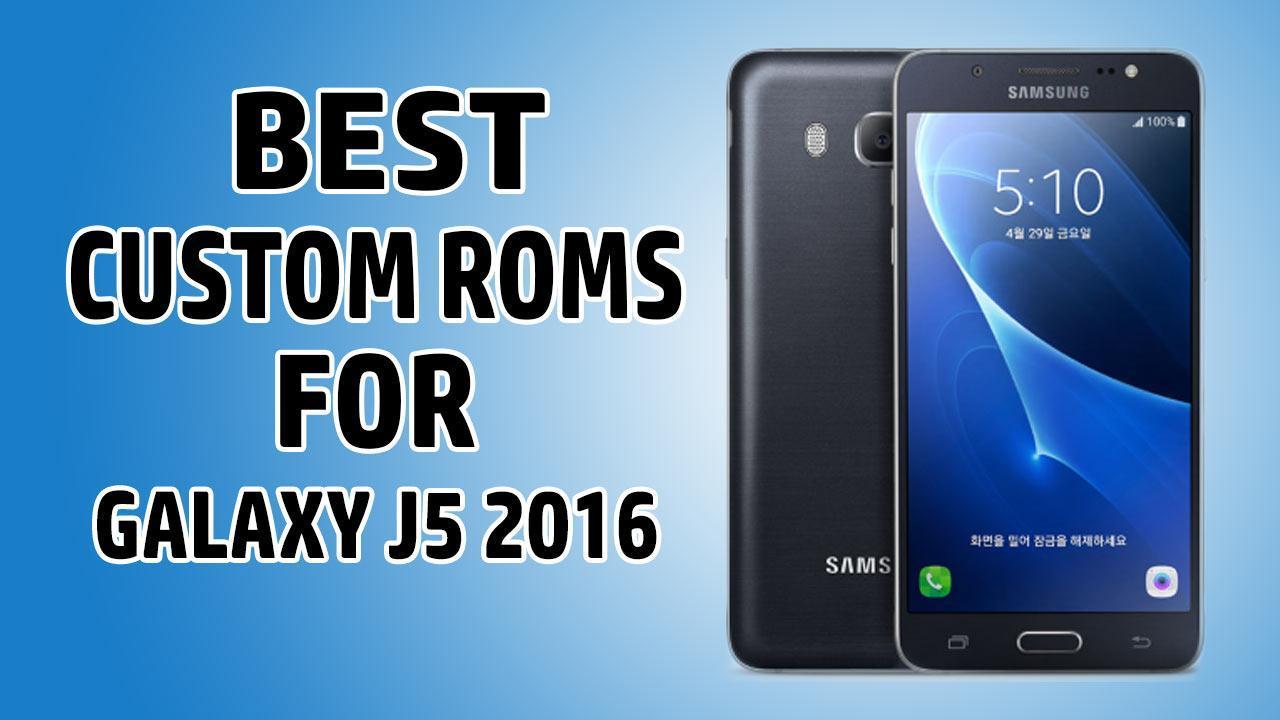 Samsung has launched it’s Galaxy J5 2016 in India earlier and as we all know 2017 is going to end and the device also appears a bit outdated as compared to the current devices. We know that its hardware can’t be replaced but software can be changed by putting in some efforts.

Samsung has slowed down the update process for this smartphone but we can update the software of the device by rooting it. So in this article, you people will get to know about the Best Custom ROMs available for the Galaxy J5 2016.

Currently, it is one of the best and easily available ROM for the device. This will update your Galaxy J5 2016 to Android 7.1.1 Nougat. If you are looking to upgrade your device to Android Oreo then stop searching as currently hardly any ROM is there which provides Oreo for this device. This ROM was launched to replace the CyanogenMod and is very similar to that ROM. The ROM is free from any bloatware and comes pre-loaded with apps like AudioFX, Camera, Calculator, etc.

This ROM is also based on the Lineage OS which means that in this ROM as well you will be getting a stock like an experience. It is based on Android 7.1.2 and has some bugs which will get fixed over the time. The device offers no bloatware and has tons of customization options. This OS comes preloaded with Gesture options which may save your time. Additionally, its offers OTA(Over the Air) updates which means as the developer updates the OS you will get a notification on your device. It is one of the most customizable OS as one can customize each and every element of the ROM.

This ROM is based on the Android 6.0.1 Marshmallow which is one of its biggest drawbacks otherwise it brings the Galaxy S8 like UI to the device and offers exceptional features like multi-window, VoLte, HQ sound, etc. It is almost stable and has no or fewer bugs. The biggest positive point of this ROM is that it supports every version of the Galaxy J5 2016 which means a single ROM can be installed on every variant of the device. It offers some exclusive Galaxy S8 features like Always On Display. The UI offered by this ROM is a mixture of Galaxy A7 and the Galaxy S8 which is one of its merits.

This ROM brings the Galaxy Note 7 like UI to your Galaxy J5 2016 and some apps of the Note 7 has also been made available in this ROM. The ROM is very close to stable and can be used without worries. It is based on the Android 6.0.1 Marshmallow which is the department where it lacks. It offers the November(2016) Security patch which means this ROM is not that security focused. Some exclusive features like Note 7 Camera app, Note 7 Music player, Note 7 Calculator, better RAM utilization, increased processor speed and clocking is present in this ROM. After installing this ROM you can clearly feel the performance difference.

In case you don’t recall, the Galaxy J5(2016) is powered by a Qualcomm Snapdragon 410(64 bit) processor clocked at 1.2Ghz coupled with 2GB RAM. In the front, it has a 5.2(Inch) HD AMOLED Screen with a resolution of 1280 x 720 pixels. In the Camera department, it has a 13MP rear camera with Aperture f/1.9, LED Flash and in the front, a 5MP shooter is present with LED Flash. The device runs on TouchWiz UI based on Android 6.0.1 Marshmallow. Powering it is a 3100mAh battery.

Do note that for installing any of the custom ROM you have to install a custom recovery like TWRP or CWM first and a rooted device is a must. For more updates stay tuned to us.