A Few months ago saw the VAIO, known in the computer business, announced its first mobile phone in Japan with Windows 10 Mobile . The Phone Biz was revealed with LCD screen of 5.5 inches and full HD resolution (1920 x 1080 pixels), 3GB of RAM, chipset Qualcomm Snapdragon 617 octa-core 64-bit 1.5 GHz, Adreno 405 GPU, 16 GB of memory for internal storage (which can be expanded via microSD card), the main camera of 13 megapixel, 5 megapixel front camera, battery of 2800 mAh (same as Moto E3) and support for Microsoft Continuum.

Recently a Windows 10 smartphone from VAIO corporation carrying the model number VPU051C11N passed through Wi-Fi certification, Now the phone only needs to pass the FCC tests, After that it can go for sale. There are not many details about the phone. Currently, we only know that the phone is a high-end smartphone or probably a mid range and it has 5 GHz Wi-Fi frequency as well as Wi-Fi AC. 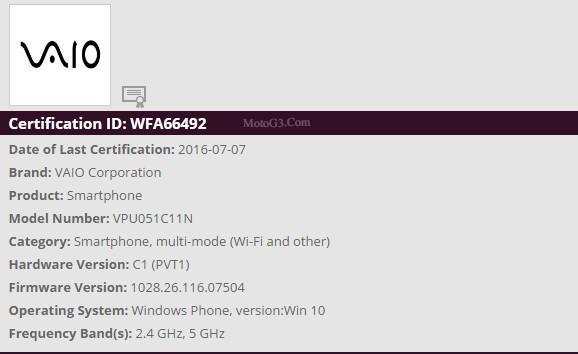 The company did not disclose plans to launch the Phone Biz in other countries, but details about a mysterious model of the company started by Bluetooth SIG certification. While the former is known for VPB0511S record numbering, this new is presented in the documentation as VPU051C11N. Are we facing an international version of the Windows 10 smartphone? 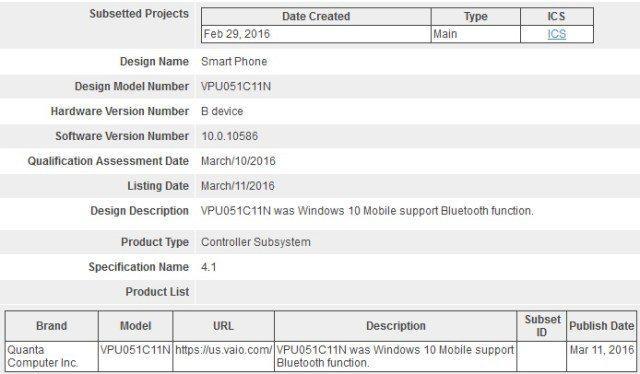 If we remember that this is not the first time we see a Vaio device go through some database with different numbers, in 2015 we saw a machine called Quanta MTP8952 be spotted on GFX Bench tests showing a device with a 4.7 screen inches and full HD resolution.

Unfortunately, we do not know if this is the same device that we are seeing now in the Wi-Fi documentation, which leaves an opening for various possibilities for the phone.

The documentation was recorded Today, indicated that this new smartphone, or variant Phone Biz, to be revealed soon. Launched for $ 430 in Japan (average of R $ 1,600 in direct conversion) hardly will see the Nipponese machine here, but as the brand has been re-establishing in Brazil with the launch of new notebooks. You can hope for a good device from Vaio in near future.