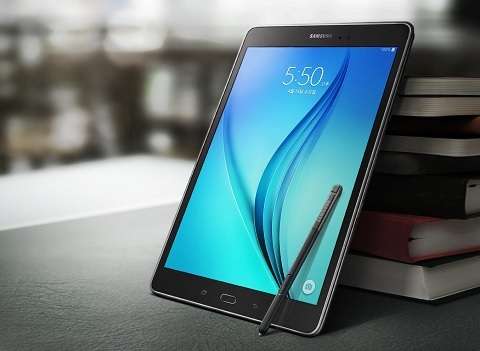 Yesterday, we reported about a new variant of Samsung Galaxy Book 10.6 which was based on Windows platform. And now what we have here is a new option for the Tab A series. The Tab A rubs on Android and just passed via FCC under the model number SM-T385M. It was listed under the FCC ID A3LSM385M, while the model numbers are similar to that of the TAB A series tablet not Tab E 8.0 2017 series which was reported yesterday, which is Samsung’s budget Android tablets.

Samsung doesn’t usually hold any major events to announce it’s tablets especially budget ones. As per the picture, we can see a newly redesigned back panel which follows a similar design language as its mid-range J series smart-phones for the back panel. The Tab A will feature a metallic middle portion and the top while the bottom areas are plastic for antennas.

Moreover, the button placements are same as its predecessor. The only difference spotted is that the SD card tray is moved on to the other side.This time the camera is coupled with a LED Flash which was missing in the Tab A series 8.0 model.

The Galaxy Tab A 8.0 2016 is powered by a quad core 1.2Ghz chip, with 2GB RAM and 16GB ROM. While the display was an 8-inch TFT panel with a resolution of 1024 x 768 (XGA). So, the new variant will possibly improve the n area mentioned above. And we could now get a Super AMOLED Display, which at least HD. Furthermore, the camera was a disappointment with the lack of flash, but this time we have one. Anyways who clicks pictures with a tab right?

Though the battery was a decent 4200mAh; with a claim to last for 5 hours and 114 hours of music play back. So, there are many areas the new Tab A could improve on and give a better experience at a budget price than its predecessor. Stay Tuned for more updates, as soon as we learn more about its specs.