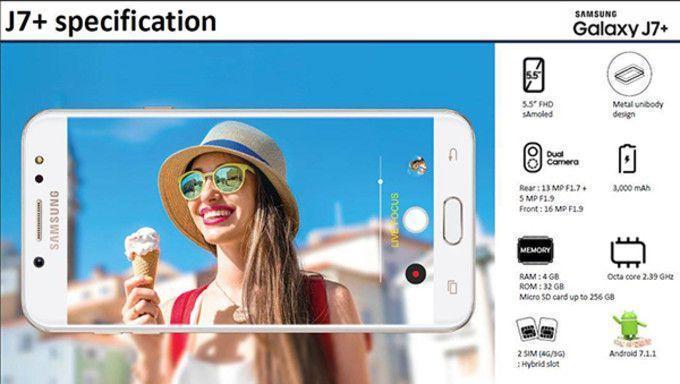 Samsung Galaxy J7+ will be a Dual-SIM device and will come with the support of 4G connectivity. It will come powered by an Octa-Core processor clocked at 2.4Ghz which may be an Exynos chipset. Leaks suggest that it will have 4GB of RAM for multitasking. The device will offer 32GB of internal storage expandable up to 128GB’s via micro-SD Card. It will run on the latest TouchWiz UI based on the Android Nougat.

Regarding Display, it is leaked that the device will have a 5.5(inch) Full HD AMOLED screen with a resolution of 1920 x 1080 pixels. Regarding Camera, the images show that it has a 13MP+5MP Dual-Camera setup in the rear with Aperture f/1.7, PDAF, LED Flash and in the front, will offer a 16MP snapper for selfies. It is good to see that brand like Samsung is also taking care of customers who are low on budget.

It will come pre-loaded with Bixby virtual assistant and will be fueled by a 3000mAh battery. The pricing of the device is not yet available, but it will be available in following color options: Black, Gold, and Pink. There is a possibility that Samsung might launch this in India along with the launch of Galaxy Note 8.