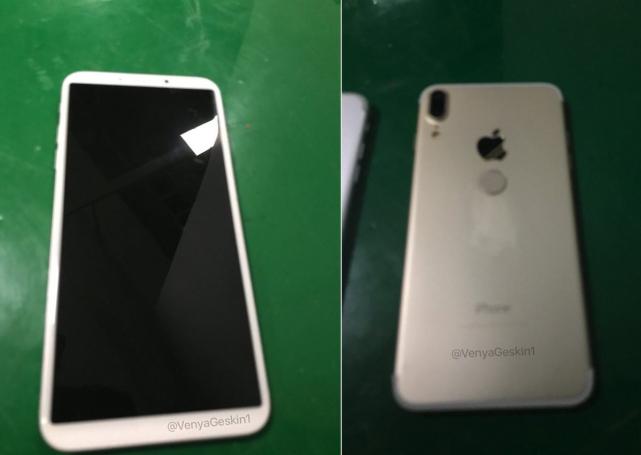 There’s not even a single day goes by without an iPhone leak. Every leak and rumor are bringing us closer to the real device which is set to release after a few weeks. Now what we have here is an iPhone 7s spotted at a Foxconn production facility in China. Here the alleged iPhone 7s also looks a tad bit slimmer than the previous leaks.

Furthermore, the rumor about the vertically aligned Dual-Camera setup is visible here. And the most important thing is the rear mounted circular fingerprint reader. Which on the iPhone 8 is either not present or it houses the scanner on its side power button just like the latest Sony Xperia phones.

Now with the emergence of this image, the iPhone numbering and variants family gets more confusing. Because on the front we have a full-screen display. The numbers and variants could be anything for this model. Also, there is also a possibility that this could just end up being a prototype altogether.

Moreover, the color here seems like a Rose Gold, with the similar antenna lines design to that of the iPhone 7. The addition of the Fingerprint scanner at the rear could omit the Iris scanning functionality of this device. As that functionality could exclusively be reserved for the more premium iPhone 8 model.

There’s no information whether this model will use the OLED panel or not. Earlier there was a leak from a well-known luxury case maker as well which also showcased similar vertical camera placement, but there was no sign of the rear mounted fingerprint scanner which is prominent in today’s leak.

The authenticity of this leak cannot be confirmed as of now, and it is recommended that you take this particular piece of information with a pinch of salt.