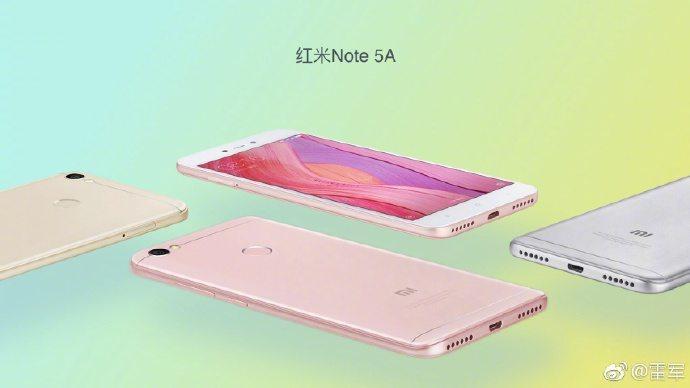 Xiaomi’s Redmi Note 4’s successor Redmi Note 5a is just a few days away from launch, and we already have a fair share of information about its specs and pricing details. And now there’s an Official date for the unveiling of the handset, which is 21st August. In addition to that, there’s also some official renders of the Note 5a in various colors and also a fingerprint scanner can be seen, which leaks didn’t showcase.

The budget oriented Redmi Note 5a is expected to pack a Qualcomm Snapdragon 425/630 which is a Quad-core processor and the latter is an Octa-core clocked at the same 1.4GHz/2 GHz respectively. Coupled with 2GB/3GB RAM and 16GB internal storage which is expandable. The internal storage comes in with either 32GB or 64GB options with expandable storage via micro SD card (up to 128GB).

Furthermore, on the front the Redmi Note 5a sports a 5.5-inch 1080p resolution IPS LCD Panel. No word on the protection glass usage yet; it also houses a 16 mega pixel and 13 mega pixels for the rear and front cameras. Battery capacity of the earlier leaks points out to a 3000mAh pack with Qualcomm Quick charge support.

The Redmi Note 5A will come in Black, Gray, Rose Gold, Gold, Blue, Red, Pink, White and Silver shades. It is believed to run on Android 7.1.1 Nougat with MIUI 9 out of the box. The company plans to price the device at CNY 999  (Rs. 9,500 INR) and will be made available from Monday itself, for flash sales, like all its devices.