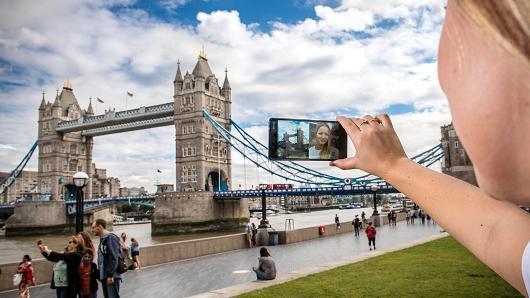 HMD today announced their most awaited flagship under the Nokia branding, and it’s the highly anticipated Nokia 8, which is company’s high-end smart phone ever to compete with the likes of Galaxy S8, iPhone 7, Moto Z2 Force and LG G6. The flagship’s earlier leaked rumors came out to be true, and the device comes with all the latest and greatest specs like all other flagships. Pricing is also not much heavy on the wallet, as the device comes with a price tag of  $599.

The design looks familiar to the likes of Nokia 6 but its made from more premium materials such as glass and polished metal, which looks much more refined. On the front, we have a 5.3-inch Quad HD IPS LCD, with thick bezels at the top and bottom. The bottom bezel houses a rectangular finger print scanner, with two backlit capacitive navigation buttons. While the top houses a 13 mega pixel wide angle camera and the good old Nokia branding.

The most notable feature Nokia is touting with this handset is the “Bothie” feature. Now Bothie allows you to use both Front and Rear cameras simultaneously with the Dual-Sight mode. And take pictures or live video streaming to Facebook Live and YouTube Live with a single touch.

Along with 360 Degree Audio recording with their OZO spatial 360° audio; which helps accentuate the right sounds while reducing ambient sounds around you or minimizing the background noise.  And Coupled with 4K video capturing abilities, your clips won’t compromise on a single sight or sound.

Here are the complete specifications of the Nokia 8.

We will have to see how the company performs in the premium end smartphone market, and the Nokia 8 smartphone looks promising and is surely capable of putting Nokia back on track.