Oppo’s subbrand RealMe’s last year RealMe 2 Pro was indeed a disruptive market smartphone. The company tried to offer the best bang for buck deal when they announced the device and succeeded quite well. Later the company decided to provide the major Android OS update for the RealMe 2 Pro. The device started to receive ColorOS 6 on top of Android 9 Pie, but that didn’t go as planned. After the update, RealMe 2 Pro suffered Bootlooping, and the rollout was immediately suspended. ColorOS 6 (bearing build number RMX1801EX_11.A.20) added a bunch of new features. But it also bought serious Bootlooping issues to some users.

Super quickly, the company released minorly tweaked version RMX1801EX_11.A.21 of the same build for few pre-registered users. RealMe also made an official announcement regarding the issue and rollout. They said, “We will start pushing out the OTA to the users who have signed up via the form first, and then issue the firmware to all users who have not registered. The whole rollout process will take up to 2 weeks approximately (there are maaaaany realme 2 Pro fans out there!), so please do not get impatient if you do not receive the OTA as soon as you sign up.”

Now after a couple of weeks, finally the update for RealMe 2 Pro is listed on the company’s official website on their software update page.

This could be a sign of relief for all the RealMe 2 Pro users as this could be a hint for a wider rollout. Even RealMe support is now telling users that the update is in the final stage of rollout and will reach to every user soon. 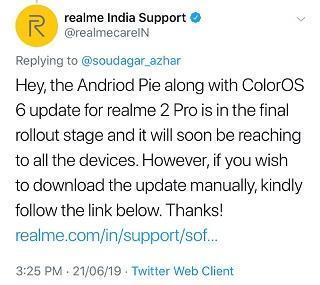 The changelog remains the same for the update, and those who haven’t received the ColorOS 6 Android 9 Pie update yet will hopefully get it in coming days. Stay tuned and let us know if you have received it yet or not.