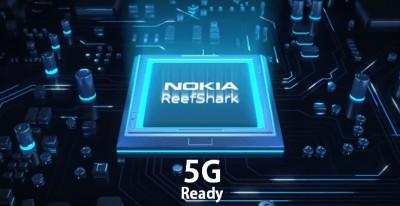 After the successful 4G Revolution, the next big thing in telecom is the 5G Revolution which is about to begin soon & Nokia who has been leading the way into this doesn’t want to miss out on a single opportunity. So, the company has developed a brand new 5G Chip that will be running in your nearest 5G network towers.

These 5G chips are insanely powerful & are ready to deliver as soon as 5G officially hits huge markets. Now talking about the features of this new ReefShark chips, the data transmission capabilities have been widely enhanced, and now the ReefShark is capable of moving data at 84 Gigabytes per second. Which is thrice the speed from the 23 Gbps in previous chips.

Moreover, when these chips are concatenated together with, they can deliver mind-boggling speeds of 6 Terabits per second. That should also reduce the number of towers required as one tower is more than capable enough when handling loads at high times. Furthermore, Nokia has also improved the efficiency of this chips, which now claims to sip 65% less power, which sounds quite impressive on paper.

It consists of 5G LTE radio systems with front-end digital modules as well as a transceiver, and also a baseband processor. Apart from that, carriers around the world will soon start the 5G adoption & from the numbers we heard from Nokia’s chips, there shouldn’t be any single excuse on speeds being throttled on 5G networks.

It has to vanish when such an advance, high-performance systems, and chips are behind the scenes. Nokia conveyed that the ReefShark will start shipping from Q3 of 2018.