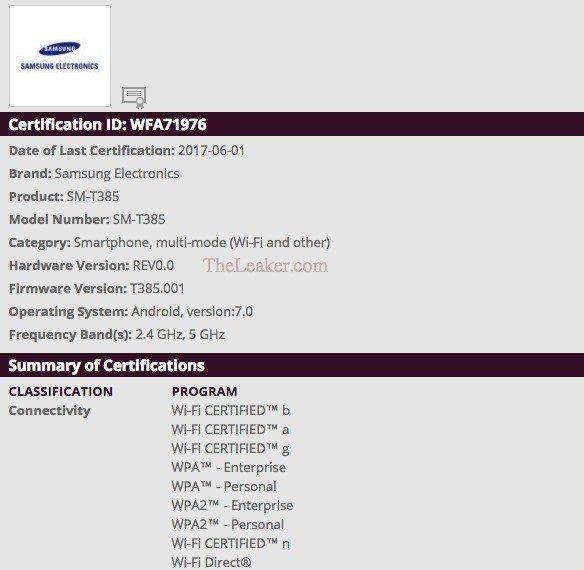 An unknown Samsung device with the model number SM-T385 just showed up for Wifi certification, and we have a guess that this could be the next budget series device from Samsung.

Usually, the T series model numbers belong to the Samsung Tablets, but the Wifi certificate mentions that the device is indeed a smartphone only.

There aren’t many details available for the device at this point but what makes this leak interesting is the fact that recently a latest Exynos SOC from Samsung was also leaked which hints that a new budget device might be in development.

The same mystery device just now also featured on GfxBench as well, and some other details of the device were leaked which confirms that this indeed is going to be a new lower priced phone from Samsung.

The device features a Qualcomm Adreno 308 GPU which means that device will either have Qualcomm Snapdragon 425 or Snapdragon 427 which confirms that this device is indeed going to be an entry level smartphone only.

Samsung is losing share to companies such as Xiaomi in the entry level smartphone market in the subcontinent so this could be Samsung’s move to again become a market leader in this segment.

The latest Exynos SOC was leaked by a Twitter user named @mmddj_china.

The leak mentioned the SOC named as Exynos 9610, and the leak mentioned that the CPU would boast four Cortex A73 cores along with 4 A53 cores. The SOC has been developed using 14nm LPP technology and also will come with Mali G72 MP3 graphic processing unit(GPU).

The SOC has been designed using 14nm LPP technology and also will come with Mali G72 MP3 graphic processing unit(GPU).

The release date for the SOC has also been mentioned which hints at a Q4 2017 release.

Recently, the Galaxy A4 2017 was also leaked which further stir up the situation and create a possibility that a whole new series of Samsung Devices might be coming our way this fall.