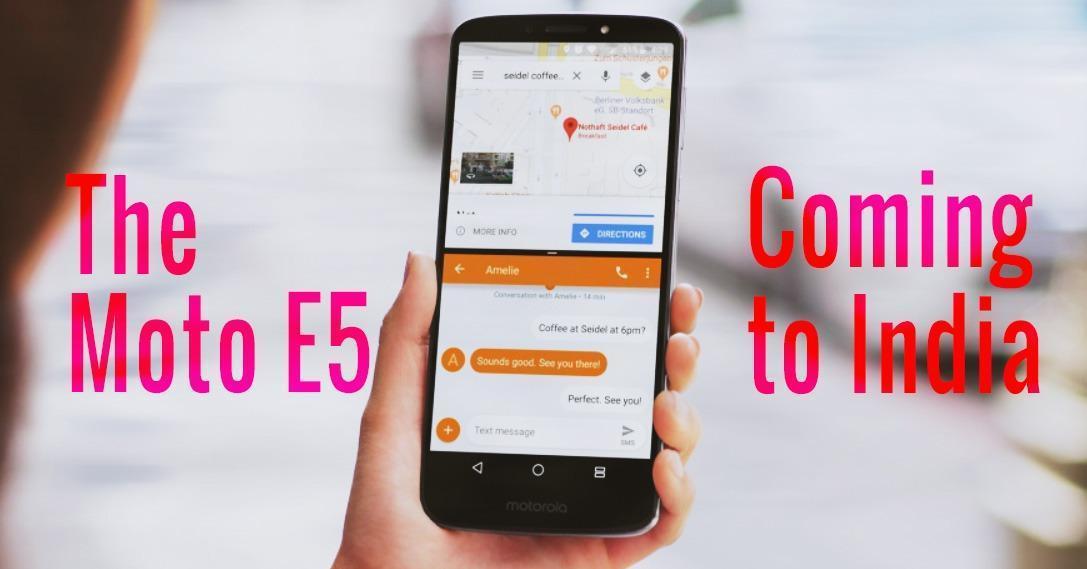 Motorola’s Moto E5 series takes care of the budget Motorola buyers, and the latest E series smartphones have already been on the market for a couple of months. It is finally making its way to India now where it will find most of its buyers. The Motorola Moto E5 will be sold in India via Amazon and yes will also be made available in Moto-hubs as well. The device will retail for Rs. 10,770/- INR for the standard Moto E5 model. Which sports a massive 4000mAh battery with fast charging; a premium metal unibody design, comes with 2GB/3GB of RAM and 32GB of internal storage. However, we’re not sure whether a 4GB is available or not. The device is listed on Amazon, but this could be sold by a third party seller and not an official price.

On the front the Moto E5 sports a huge 5.7-inch 18:9 max-vision HD+ IPS LCD. ON the rear you get the fingerprint scanner within the Motorola batwing logo, as well as the circular watch face like camera setup, which holds the 13-megapixel sensor with an LED flash while the front has a 5-megapixel shooter with a selfie flash as well. Under the hood, the Moto E5 is powered by a Snapdragon 425 which is a significant upgrade from last year’s Mediatek chips.

The device runs on Android Oreo 8.0 out of the box, but unfortunately, Motorola won’t be providing any major Android OS updates for the handset, except the usual Security updates. At that price, the Moto E5 will go against the Redmi Y2 which has dual camera’s and marginally better CPU but lacks in battery life, and the newly launched Realme One which looks quite impressive on the spec sheet.

The Moto G6 Play could have been priced at 11K while the Moto E5 should sell for 8k or 9k. Lastly, there’s a Moto E5 Plus with laser auto-focus and an insane 5000mAh power pack, but for now, no details about its launch in India have shown up.