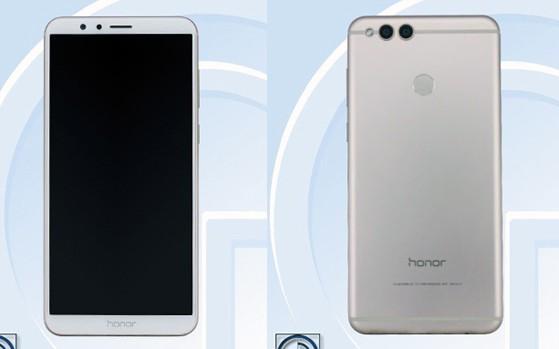 A few days ago, Huawei tipped on a Chinese social platform Weibo that son they will be launching a new handset and it will be the successor to the current Huawei Honor 6X. They have mentioned “Now one can enjoy his device with more freedom and widely” which gives us a hint that the device will have an 18:9 Screen and today the handset got benchmarked on Geekbench, and one image of the phone is also leaked.

Geekbench listing of the upcoming Huawei Honor 7X has leaked the specifications of the smartphone, and with the leaked image you people can get an idea about the design of the phone as well.

As per Geekbench, the device runs on a Hi-Silicon Kirin 659(64 bit) Octa-Core processor clocked at 1.7Ghz along with 4GB of RAM. The same processor can be seen on the recently launched Huawei Honor 9i. The phone receives an acceptable score of 909 in Single-Core while for Multi-Core it has received 3159.

The device has also cleared TENAA certification due to which the images of the phones are also available. The device has an 18:9 Display(5.7 inches) in the front which means this is probably the second device from the house of Huawei to come with an 18:9 Screen.

It will have a Metallic design, and Fingerprint Scanner is placed in the rear. The rear also houses a Dual-Camera setup with LED Flash and in overall, the design looks similar to that of the Flagship Honor 8 Pro.

The device may have a 16MP+2MP rear Camera while in the front, it may come with an 8MP shooter. As per the listing, it runs on EMUI 5.1 based on Android Nougat. Price related information is not yet available, for further updates, stay tuned to us.