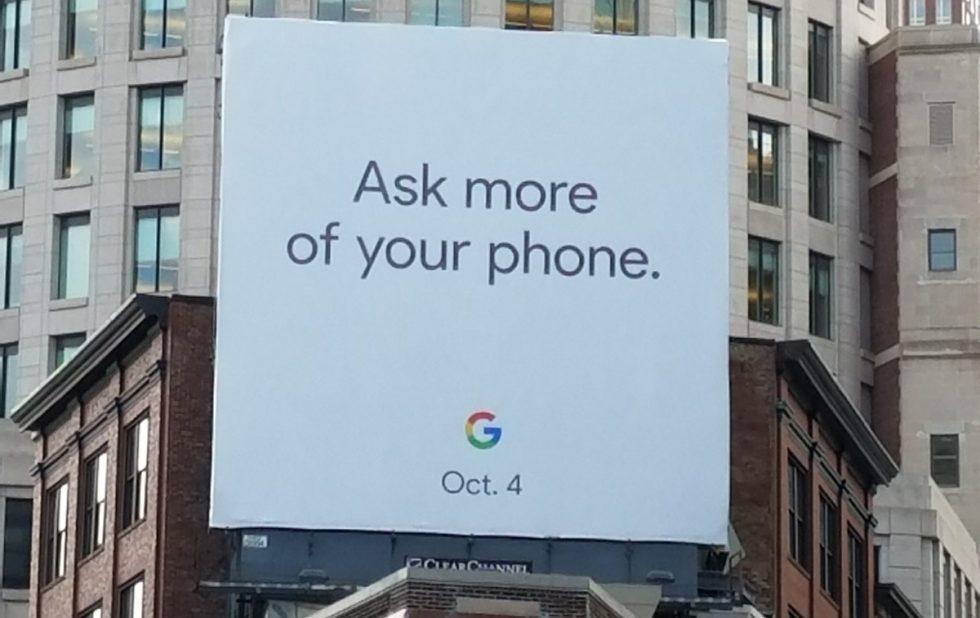 Google’s Pixel smart phones are the only major flagship smartphones that are up for launch now, as all the major awaited flagships of this year have been released already. And soon the new Pixel device will be revealed as well, as per a new billboard spotted in the City of Boston; displaying the unpack event for the device on October 4th, with a phrase saying “Ask more of your phone.”

Last year, Pixel phones were launched on October 5th, and now the advert showing the date as 4th. Is enough to convey that the next generations Pixel smart phone are arriving on that day. Apart from this, today the Pixel 2 XL the larger one of the Duo passed via FCC. But nothing much was revealed about the device; except confirming the fact that, LG being the sole manufacturer of the larger device. While we already know that HTC will make the smaller one.

However, folks at Droid-life have pointed out that, the device had almost all US bands; except it’s missing on the new T-Mobile’s 600MHz band 71. This could also have something to do with project fi maybe? Anyway, the pixel will be a direct competitor for Apple’s iPhone X and the device is also expected to opt for this year’s trendy Bezel less designs.

Moreover, if we talk about specs, it’s the Snapdragon 835 ticking under its hood paired with a healthy 4Gigs of RAM; and 64GB/128GB storage options. With no SD-card support and as per the rumors it will also ditch our beloved headphone jack. For which Google should compensate by providing a free Bluetooth ear-pods. And pricing can be expected on the higher side

And pricing for the pixel devices is expected on the higher side around $700 because the Android One devices will be filling the budget and mid-range void. Here’re some of the latest devices from Motorola, Sony, and HTC that could end-up as Android One devices. Stay tuned, as we dig more into this so, watch out more for this space.