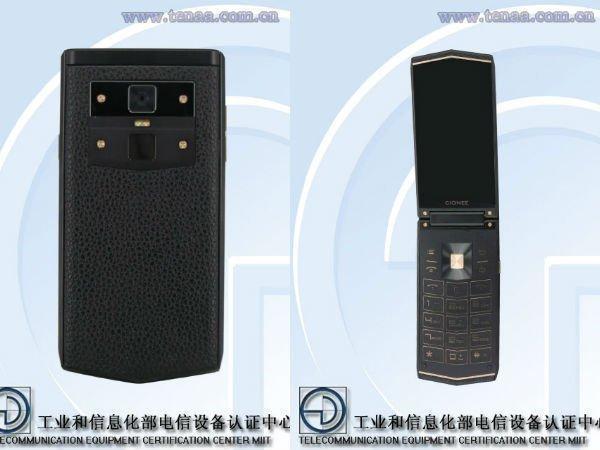 Coming from the heart of mainland China, the smartphone maker Gionee made quite a buzz last year by launching more than six phones with bezel-less display front. And now the company is gearing to launch a luxury phone similar to what Samsung has been doing with its W2017 line up of devices. Gionee’s upcoming phone was leaked today carrying the model number W919, featuring a clamshell design.

The phone as you can see in the images below looks quite similar to the Lamborghini phone and has similar angular design cues, exposed bolts which adds the industrial feel to it. And it is a completely revamped design compared to its predecessor, the W909. They share one thing in common, and that’s the dual screen setup, where you will find one screen inside with the T9 keypad and one on the outside, when you open and close the flip shell.

On the specs front, we are looking at an unknown Octa-core chip clocked at 2.5GHz, coupled with its ridiculous 6 Gigs of RAM. What are you going to do with 6GB RAM and a T9 Keyboard? However, moving further, the two displays come at just 4.2-inches and have HD resolution. Along with that Gionee W919 has 128GB onboard storage with SD-card slot which supports upto 256GB of memory expansion capacity.

Furthermore, on the rear, a camera is present and under which you also get a Dual-LED flash and also a fingerprint reader. As you can see the rear features luxurious materials such as cowhide leather or maybe crocodile leather, which screams this device belongs to the high-end premium segment and pricing will be accordingly, more than $799.

With this device, Gionee might be looking forward to filling the space for brands like Vertu, which are no more among us.