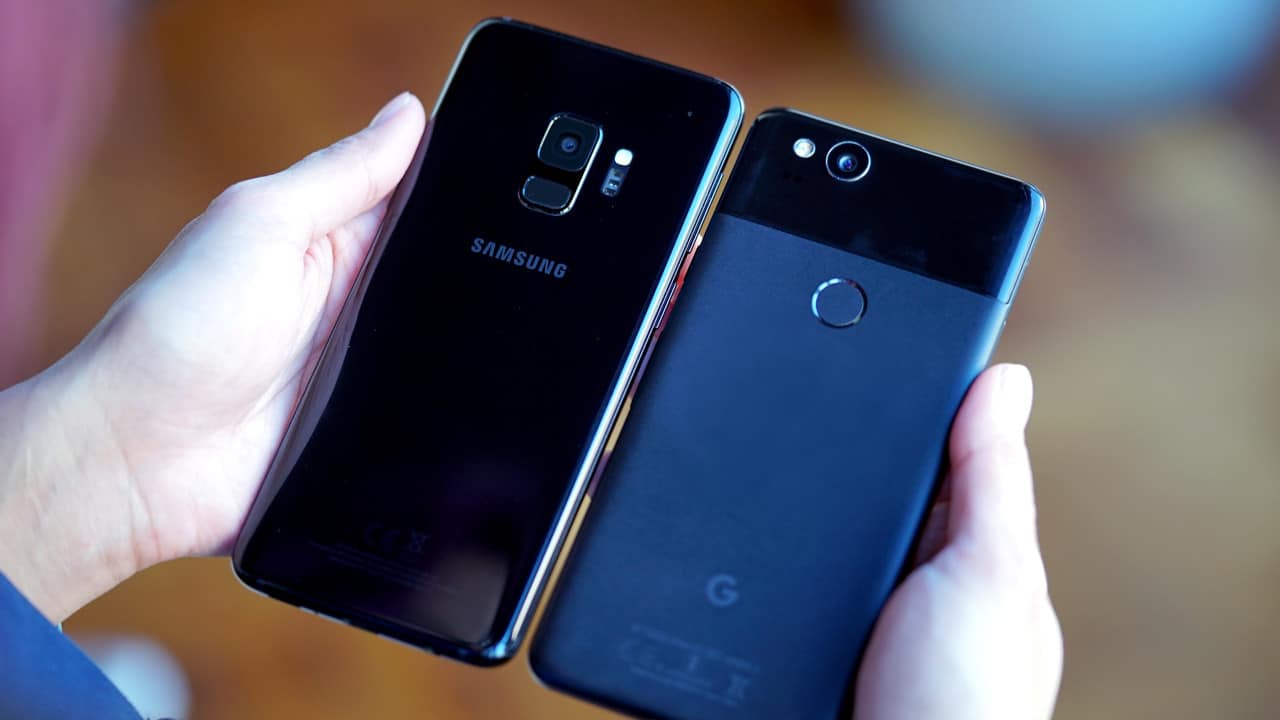 Whisper it quietly, but everything in the garden is looking distinctly rosy for smartphone brand Samsung at present.

Not only did the Korean firm command a dominant market share of 21.9% in 2017 (Apple trailed behind with just 15.2%), for example, but the initial success of the Galaxy S9 handset means that this gap is unlikely to be overturned any time soon.

Despite this, the Galaxy S9 may find its market dominance challenged by Google’s much-vaunted Pixel 2 model this year, with the latter’s design, performance, and specification boosted by the brand’s significant investment in HTC’s engineering expertise.

Below, we’ll compare these two premium handsets, while asking which one is likely to prevail in an increasingly competitive marketplace.

The Design – A Clear win for Samsung

We start with the respective design of these handsets, and in this field, there’s no doubt that Samsung and the Galaxy 9 retains a considerable competitive advantage. This is not to say that the Pixel 2 is an unattractive handset, of course, but Samsung has spent years perfecting the design of the Galaxy range and creating a premium aesthetic that is reflective of the brand.

The S9’s specification underlines this, with a 5.8-inch, Quad HD, and Super AMOLED screen framed by elegantly curved edges and a nearly bezel-less design. Aside from the visual impact of the handset, users also benefit from the inclusion of a classic, 3.5mm headphone jack and wireless charging, which are noticeably absent from the Pixel 2 design.Not only this, but the standard Pixel 2 boasts a classic oblong design with a traditional, 16:9 display, and one that pales in comparison to the Galaxy S9.

Performance and the Camera – Does the Pixel 2 Holds Sway?

Overall, the Pixel 2 is considered to be the ideal Android-lovers handset in the current market, and there are several reasons for this.

Sure, the Galaxy S9 boasts a superior design and display, but there’s a growing argument that the Pixel 2 is slightly superior when it comes to its performance and the quality of the inbuilt camera.

This will be contested by some, particularly with the S9 boasting a slightly superior processor (it is powered by the Exynos 9810 processor while the Pixel 2 utilizes a Snapdragon 835 alternative) and a more powerful battery unit (3,000mAh to 2,700mAh).

In reality, these variations are negligible, while it’s important to note that Google’s handset offers access to a pure version of the latest Android OS. Not only this, but Pixel 2 users will be able to receive the latest Android updates and system upgrades long before Galaxy S9, creating a competitive advantage that’s hard to ignore.

The Pixel 2 also retains a slight advantage regarding camera performance, although it’s been pushed hard by the exceptional S9. Google specification boasts a 12.2-megapixel snapper with an aperture of f/1.5, for example, while there’s little to choose between the two when it comes to capturing and playing video content.

Price – A Game-changer for the Pixel 2?

While the S9 and the Pixel 2 may be difficult to separate at this stage, the price may well be a key differentiator between the two handsets.In this respect, Samsung may be at a significant disadvantage, as it has followed the trail blazed by Apple with the iPhone X by applying a genuinely premium price tag to the Galaxy S9. This phone is available at the hefty, SIM-free price of £739, with the average monthly contract fee starting at around £45.

Sure, you can minimize the latter cost by seeking out discounted deals through distributors such as Fonehouse, but there’s no doubt that the Galaxy S9 retains a high price point in an extremely competitive segment of the market.

Conversely, the Pixel 2 is available for a much more reasonable price, with an initial, SIM-free RRP of just £629. Further discounts have allowed models to be sold for as little as £519, while contracts are available for less than £30 per month in the current marketplace.

Even if the cost of the Galaxy S9 is reduced further in the months ahead, it will struggle to compete with the Pixel 2’s core value proposition, as this could be its downfall as 2018 progresses.

The Bottom Line – Which Handset Holds the Edge?

At first glance, the superior specification of the Galaxy S9 would appear to provide a more compelling proposition than Google’s Pixel 2.

Still, the differences between these handsets are far smaller than the core specs suggest, while the Pixel 2’s performance, camera and access to the latest Android operating system are at least a match for the Galaxy S9.

With this in mind, the price is perhaps the decisive factor when determining which handset to buy, as this impacts directly on the value proposition available to customers. In this respect, the Google Pixel 2 is far more appealing than Samsung’s Galaxy S9, and this could well be borne out by sales and market share over the course of 2018.