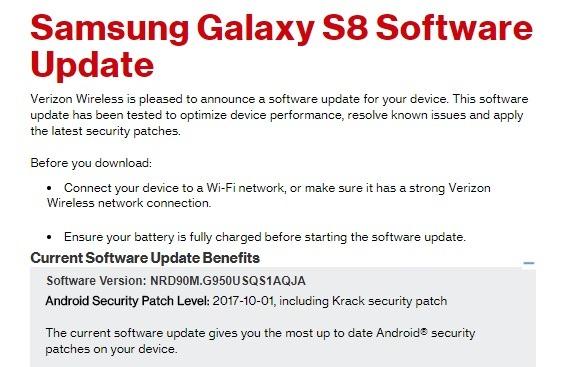 Verizon is pushing some updates today, and they are for the Samsung Galaxy S8/S8 Plus which will receive the October security patch and the KRACK exploit fix. While the other device that will get the October security patch is Galaxy S6 and the Galaxy S6 Edge, and there’s nothing mentioned about the same KRACK vulnerability for the former Flagships.

Moreover, if you’re wondering what’s KRACK (Key Reinstallation Attack) anyway? It’s a WiFi exploit which breaks the WPA2 protocol and gains access to everything connected to your WiFi network. But the changelog’s of the S6/S6 edge doesn’t mention anything about the same. However, you also get several bug fixes and stability improvemnets as usual with these updates.

Samsung has been already seeding the Android Oreo beta in some countries, but in the states its only available on the Sprint and T-Mobile, while other’s are yet to receive it. And as always juice up your Galaxy device with at least 60% battery life in reserve. Also, download the update over WiFi and if you haven’t received the notification about the update yet, then straight away head over to Settings >About Phone > System Software updates.

Stay tuned for more, as we update on which other carriers roll-out the Android Oreo beta for the Galaxy S8 and the Galaxy S8 Plus.