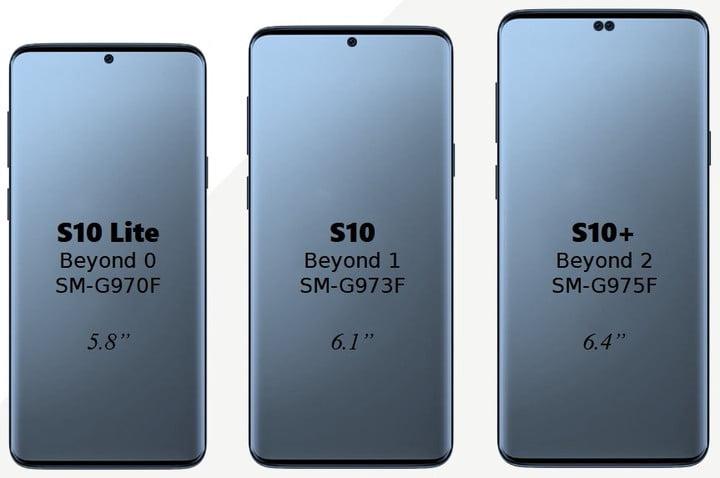 Share on Twitter Share on Facebook Share on Pinterest Share on LinkedIn Share on Reddit Share on WhatsApp Share on Telegram
A recent leak has revealed the screen sizes of various future Galaxy smartphones. The report suggests that there will be four different versions of the Galaxy S10 and a single version of the Galaxy Note10. Reports vary on the screen size of the Galaxy S10, but here is everything we know so far about the upcoming Galaxy releases-
The first model, named the Galaxy S10 Lite, sports a 5.8-inch screen. The middle model, the S10, has a 6.1-inch display. The largest model, the S10 Plus, would have a 6.4-inch display. There is said to be another S10 version- S10 5G, which will sport a massive 6.66-inch screen. It is also revealed that the two higher-end models will have an in-display fingerprint sensor. All the phones are expected to ship with AMOLED screens.

According to the source Ice Universe (A reliable tipster when it comes to Samsung phones), the Galaxy Note 10 will come equipped with an enormous 6.75-inch display. This means that it’ll be quite a bit larger than the existing Galaxy Note 9 despite the significantly smaller bezels, and much bigger than the Galaxy S9+.
The source believes that the bezels will be nearly non-existent on the Galaxy S10 models. The upcoming models are supposed to have almost 100 percent screen-to-body-ratio, thanks to cutouts in the AMOLED display for the camera sensors.
Samsung has not yet revealed any information about the specifications of the premium phones and the leaks are not trustworthy. But it is expected that the phones will feature a new iteration of Qualcomm’s mobile chipset, most likely the Snapdragon 855.
The Galaxy S10 series is currently expected to make its first official appearance at an upcoming event. There is no news on the Galaxy Note 10s announcement date yet, but if recent history is anything to go by, an unveiling in early August is highly likely.
Share on Twitter Share on Facebook Share on Pinterest Share on LinkedIn Share on Reddit Share on WhatsApp Share on Telegram