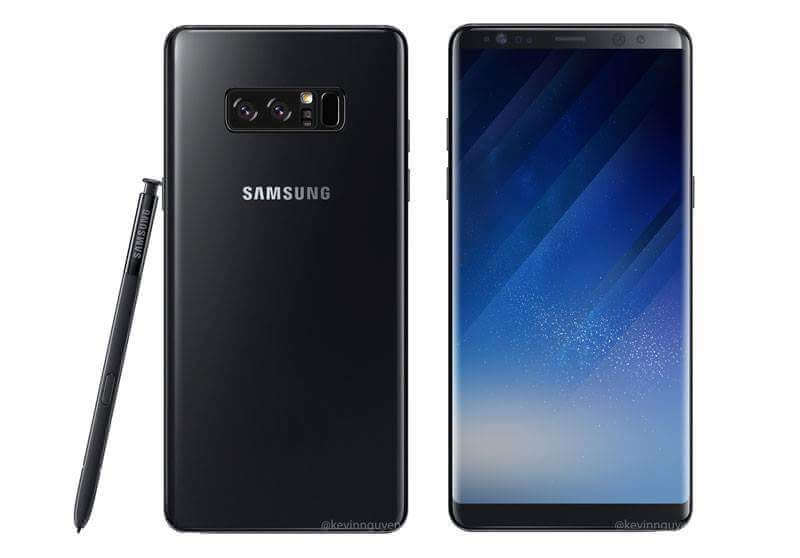 Samsung’s Galaxy Note 8 has been a part of several leaks recently. The biggest rumor about the Note 8 is that the phone is going to come with a dual camera setup and luckily there is now a concrete evidence of the Note 8 having the dual-camera setup. There are some renders and leaks ranging from snaps of cases for the Note 8 to even some press renders of the device.

There are some renders and leaks available online ranging from snaps of the cases for the Note 8 to even some press renders of the device which almost confirms the exterior of the rumored device.

Earlier today front of the device was leaked via a screen protector made specifically for the Note 8, and now we are having some leaks related to the back of the smartphone. With these leaks, it is quite clear that Samsung will be taking the Fingerprint scanner at the back of the phone only, and will also be ditching its favorite button styling at the front just like the Galaxy S8 and S8 Plus.

The back of the phone will have the typical placement of Fingerprint sensor, dual rear cameras and a Dual led flash.The back part will also include the heart rate sensor which helps S-health to monitor pulse.

A majority of the Samsung Galaxy S8 users were displeased with the placement of the fingerprint sensor n the phone as it was a bit far to reach, now we will just have to wait and see how this goes with the Note 8.

Note 8’s bottom part was also leaked in one picture which shows that the bottom bezel is close to minimal, Hence it is almost confirmed to see the same bezel-less design on a Note series device.

Placement of most of the things at the bottom is still the same from the Note 5, with 3.5mm headphone jack, USB port (Type C this time) microphone & speaker and then the S-Pen.

Will all these leaks surfacing every now and then there isn’t much of a surprise element to the device, but still Samsung can surprise its fans by launching the Galaxy Note 8 with something exciting.

What are your views about all these leaks of Galaxy Note 8, let us know in the comment section down below.