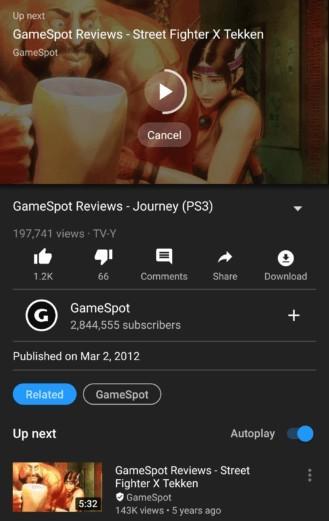 YouTube for gaming has undergone some little changes receiving some fresh features and a small update for its splash screen’s icon. The new version v2.02 has been a more than just a minor update since the v1.97 which has a little easter egg in it.

Moreover, now talking about the new splash screen it gets a new icon which is much more refined now and has lost its low poly look, but still stays in the same silhouette like before. However, the background is currently in a tilted dropped shaped instead of a rounded square which it had earlier. Apart from that, it is also reported to have adaptive capabilities in some Android launchers as per AndroidPolice.

Another unique feature gained by the YouTube gaming app was the Auto-Play feature which we are all using; in the regular YouTube app, and now the Gaming version also gets it. The AutoPlay will now play the next video, without you selecting it, automatically. It will even show a countdown circle which also has a Cancel key if you do not want to switch to the next video. Lastly, the Auto-Play can also be enabled and disabled, with a small toggle under your videos.

The update is now rolling out, and if you have not received it yet because it covers one region at a time and doesn’t appear everywhere at the same time. So, what you do is Download YouTube APK (from the link below) the APK file and just install it.