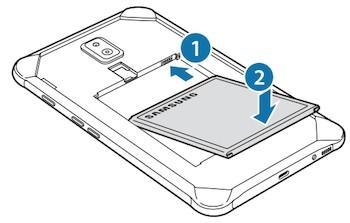 Samsung’s active lineup could expand to its tab series as well, as per these new leaks emerged on Twitter. Detailed information about the new Galaxy Tab Active 2(model number SM-T39x) has been now revealed and it brings back one of the smartphone’s initial features which have now got extinct in recent years. And that is the removable battery feature, which is very convenient, just remove the empty one and add in a fully charged pack and you’re ready to go.

Moreover, other specs resemble the Active moniker, for instance, now the TAB active 2  gets IP68 water and dust resistance. And the casing of the tablet is also claimed to be rugged frame as you can see in the images below.

The tablet also visited FCC and also spotted on GFXbench earlier revealed other details as well such as it will have a fingerprint sensor, S-Pen, USB-Type C interface and 480 Nits of brightness which isn’t that bright compared to the S8/S8+ which reaches 1000nits if needed. You might also get a business focus apps and UI in this Galaxy TAB active 2.

On the specs side, we have an Exynos 7870 SoC handling all your tasks paired with 3GB RAM and 16GB ROM with room for external storage. The display size is 8-inches coming at just 1280×800 resolution which isn’t all that sharp, and you could see pixels, an AMOLED display won’t hurt much to the company though.

Also, the TAb ACTIVE 2 series will bring Samsung’s voice assistant that’s Bixby, but it will directly get the new Bixby 2.0, which we talk about the same here. Pricing is not known yet, but you’ll be updated once we hear more about it.