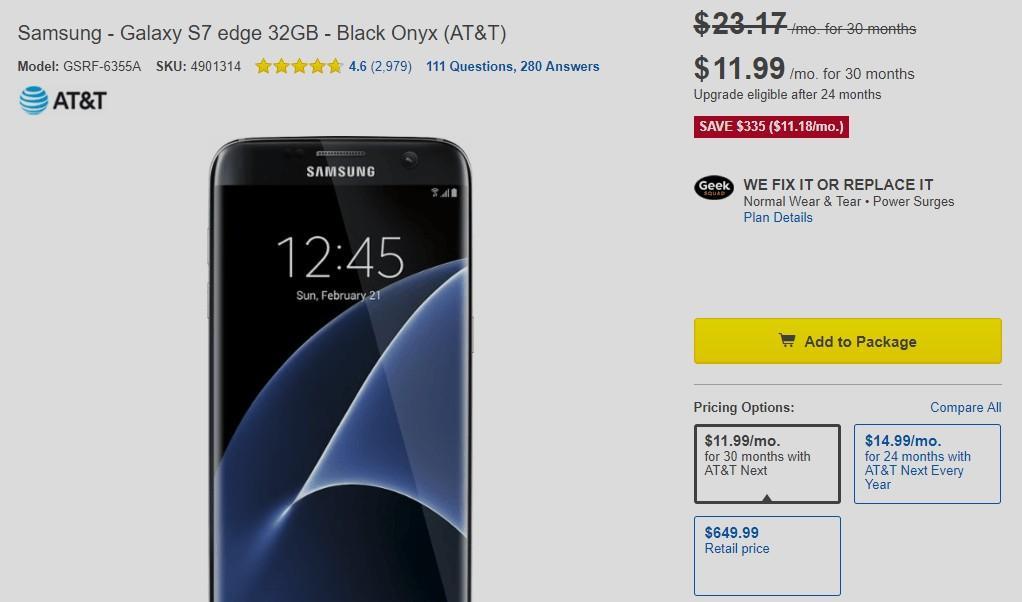 If you’re looking to buy a upper-mid range phone, and simply don’t want to spend on the latest flagships. Here’s a sweet deal for you, it’s always considered a better idea to buy the last years flagship than a mid-range or budget phone. And when the device is as good as Galaxy S7 Edge, then look no further as the Galaxy S7 Edge is available at AT&T at a 49% discounted price.

So, what you do is sign up for a 30 months contract, which means you’ll be paying only $12, down from $23.17 a month on Best Buy. And you’re also eligible for an upgrade, once the 24 months are completed. Which overall brings the device down to a pretty reasonable pricing of just $335 in total with this two years plus contract.

The device originally retails for $650 to sometimes $550 during a holiday sale, but this is a new low-price point for a new Galaxy S7 Edge.

Now even though you’re getting the 32GB base variant, but there’s also room for expansion via a micro sd-card, So storage is not a big issue here.

If you put the Galaxy S7 Edge against what’s available at the same price, the device outshines the competition. Except for the Moto X Style and Nexus 6, but they might feel a bit dated for some folks.

Moreover, you get a pretty good flagship specs and a good enough camera; along with the bonus IP68 dust and water-resistance Ingress Protection. Finally, the Galaxy S7 Edge will also receive the highly awaited Android Oreo update which is the next major OS update from Google after Nougat.

Which you may miss out on the many of the mid-range devices in the same price bracket. So, if you’re looking for your next smartphone and you’re on AT&T, then this is an excellent deal, which you should not miss.