Samsung’s Galaxy J series has received immense success in the past few years. However, due to the launch of devices such as the Mi A1, Redmi Note 5 Pro, and the Moto G5S Plus, Samsung has started feeling the heat and also the threat of losing its top position in most Asian markets, especially in India. The J series was lagging quite behind and is facing tough competition from the likes of Xiaomi and Motorola, and now to tackle this issues, the South-Korean giant has launched a brand new phone for the J series, which is the Galaxy J7 Duo.

The J7 Duo comes with a bunch of new features which we will see first time on a budget Samsung phone. The Galaxy J7 Duo, brings the highly trendy Dual-Camera action to the J series, along with the latest flavor of Android Oreo 8.0 with Samsung own skin over it. This latest handset is available in the Indian market, and you can purchase it for about a price of Rs.16990 INR, across all Samsung’s retail networks in India. As you go through the entire post and you’ll get an idea about the value for money ratio for the new J7 Duo.

The Galaxy J7 Duo sports a standard 16:9 ratio 5.5-inch 720p display, which is ridiculous in 2018. However, the device does have a Super AMOLED display and has a typical Samsung design which is continued from the J7 2016 era, while it’s thickness measures around 8.1 mm, Some minute details such as the capacitive buttons now have a new design for their icons, and the fingerprint scanner looks sleeker.

While on the rear, we get a Dual-Camera setup in the center which is stacked vertically and on each side, it is flanked by the speaker on the right, while a dual-tone LED flash sits on the left side if the camera cluster. 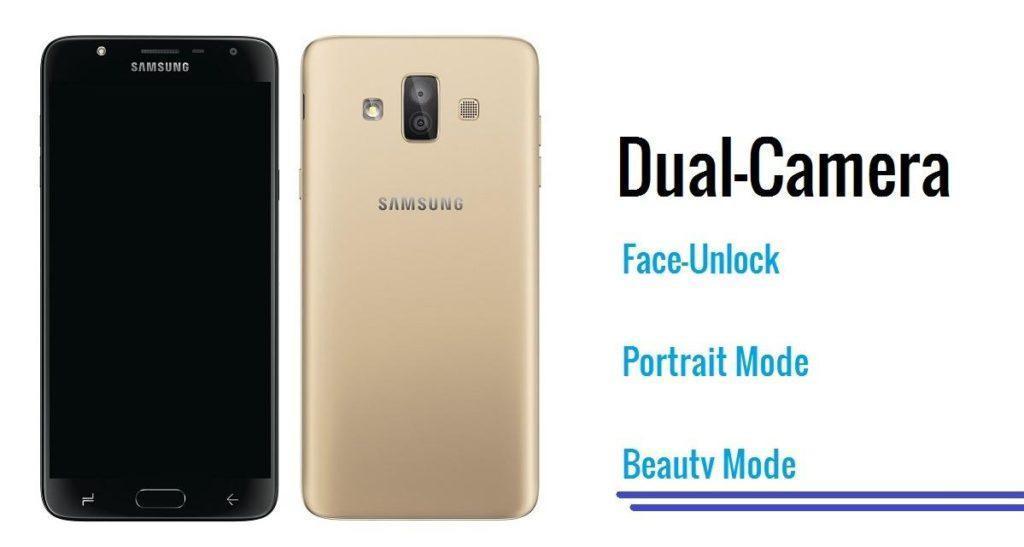 The Galaxy J7 Duo is powered by an Exynos 7(7870) series processor, which is clocked at 1.6 GHz and this is an Octa-Core chip based on the power efficient ARM’s Cortex-A53 architecture. In the memory department, the device gets 4GB RAM which is quite a healthy amount but gets 32GB as internal storage, which is a huge disappointment. The J7 Prime 2017 was priced at 16.3K and had 16GB of internal storage. However, this may not be its successor as the Galaxy J7 2018 is still about to arrive later this year.

Now comes the camera part, where you’ll find most of the upgrades, the Galaxy J7 Duo features a Dual-Camera setup with a 13 MP primary sensor, and the second lens is a 5 MP, could be a depth sensor. On the front, we get an 8 MP selfie snapper along with a selfie flash. All the three sensors have an aperture of f/1.9, means low-light is the priority here. The dual camera packs all the usual gimmicks such as portrait mode for the front camera, beauty mode, as well as you now get the option of Face Unlocking with the Galaxy J7 Duo.

Keeping it alive is a decent 3000mAh power pack, given that the display is an AMOLED panel and only runs on a 720P panel. So, it doesn’t suck juice as much as you would think. Talking about the essential sensor we got here the Accelerometer, Fingerprint reader, RGB LED Light Sensor, Proximity Sensor, Bluetooth v4.2 and like many other Samsung devices the compass sensor is missing from the device.

Overall, this is not the device which provides the most bang for your buck. However, you could wait for some more time, until the Galaxy J7 2018 arrives, which might bring some major changes to the table, compared to Galaxy J7 Duo.