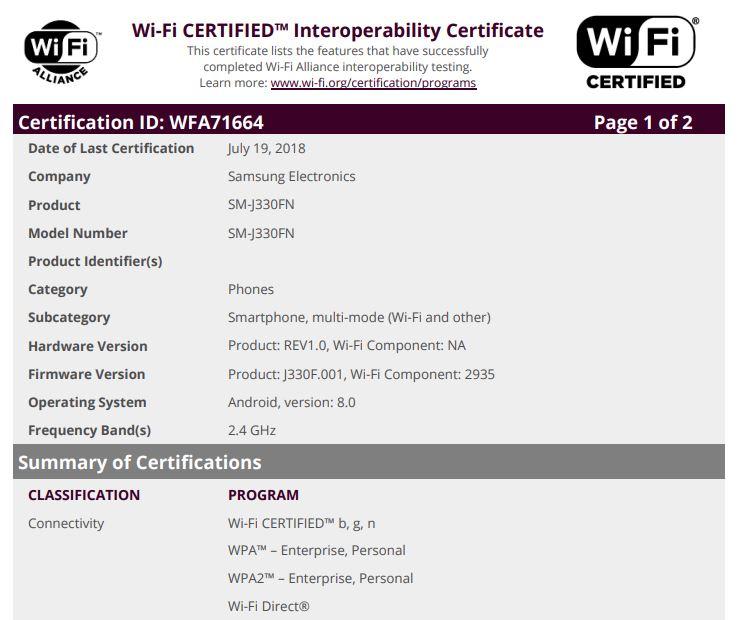 A few weeks back, Samsung Turkey gave a rough idea about the timeline for the Android Oreo update for several Samsung devices. Among those devices, Samsung Galaxy J3 2017 was expected to get the Android Oreo update around September 28th. Samsung Turkey doesn’t have that much of a record when it comes to major updates for the Galaxy devices in the country, and now it doesn’t seem like the Galaxy J3 2017 users in the country will be the first ones getting the update.

As per latest reports, the Galaxy J3 2017 has cleared the Wi-Fi Alliance certifications and is on course to get the Android Oreo update most probably in August itself. We have seen in the past that after a device clears the Wi-fi alliance certification, it does not take more than a month for it to get the update. This puts the Galaxy J3 2017 in a strong position to get the Android Oreo update in the next few weeks itself.

Samsung Galaxy J3 2017 smartphone was launched last year and comes with a 5inch HD display. The device is powered by the Exynos 7570 Quad-core processor and have 2GB RAM along with 16 GB of internal storage. The device features a 13MP camera on the back while a 5MP selfie shooter is present on the front. The device was launched with Android Nougat 7.0 out of the box and is pending the Oreo update since.

The Wifi- Alliance does not guarantee a date for when the device will get the update but it certainly is enough to support the device will be getting the Android Oreo update and in the coming few weeks.