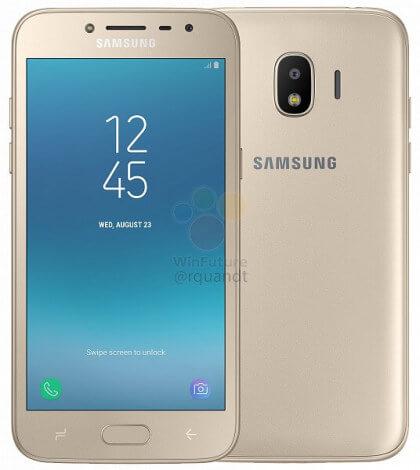 Samsung’s entry-level Galaxy J2 was about to launch soon, but the leaks of the device are still incoming, and now a clear render of the budget device has emerged online, along with its specs. The render shows off the device from front and rear, and the design looks typical Samsungish. Just the rear camera module housing has received a slight re-touch, which seems like the moto g4 plus. On the front, the design is similar to its predecessor.

Moving on with the specs they’re quite impressive, at least for the display, you get a 5-inch qHD (960×540 pixels) Super AMOLED display, which makes it the cheapest phone in Samsung’s arsenal to have this premium feature. Super AMOLED displays are usually a thing reserved for the flagships to upper-mid range devices, and most budget and mid-range phones won’t get it, let alone an entry-level device.

Moreover, the rest of the specs are a Qualcomm Snapdragon 425 processor which is a quad core(based on Cortex-A-53) chip clocked at 1.4GHz, paired with 1.5GB RAM and 16GB internal storage with an SD-card slot; standard costing in RAM department from the world’s leading memory chips OEM.

Keeping the lights on is a decent 2600mAh battery pack, on the camera front we have an 8 MP shooter on the rear, and a 5 MP snapper for selfies along with a front facing LED Flash which is a nice addition. The device also seems to have a fingerprint scanner on the front, and new redesign capacitive touch keys, adjacent to the scanner. The Samsung Galaxy J2 2018 is expected to launch next year in Q1 2018 and might cost $190 or more and will be available in black and gold paint jobs.