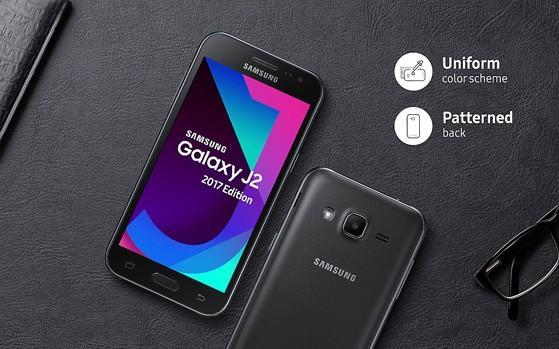 When it comes to budget smartphones, all major brands have their offerings, but Samsung has its majority of customers who still prefer to buy smartphones through the offline market. Samsung has today launched its new smartphone in the J-series known as the Galaxy J2(2017).

Samsung Galaxy J2 an entry-level device from Samsung but still offers all essential features what a consumer can expect from an Android. Let’s check out its specifications and pricing.

Samsung Galaxy J2(2017) is a 4G Dual-SIM handset and is powered by an entry-level Exynos Quad-Core processor clocked at 1.3Ghz coupled with 1GB of RAM. The phone offers 8GB of internal storage which is expandable up to 128GB’s via micro-SD card.

The phone is targeted to an entry-level user who just wants an Android device to run basic Social networking apps or casual games. The phone runs on Samsung’s custom TouchWiz UI.

In the front, there is a 4.7(inch) AMOLED Display with a resolution of 540 x 960 pixels compared to the old J2 which has a 5.0(inch) Screen. In the rear, there is a 5MP AF Camera with an LED Flash, and in the front, a 2MP shooter for Selfies is present.

The phone comes with an Ultra Data Save function which saves the extra data utilized when browsing the internet. It runs on a 2000mAh battery and will be available in Black/Gold colors. The handset is priced at 7,350 INR which according to us is expensive.

So by spending 7K, you are getting a qHD screen, a low power processor and only one gig of RAM which is very less as compared to other devices like Redmi 4, etc. For further updates stay tuned to us.