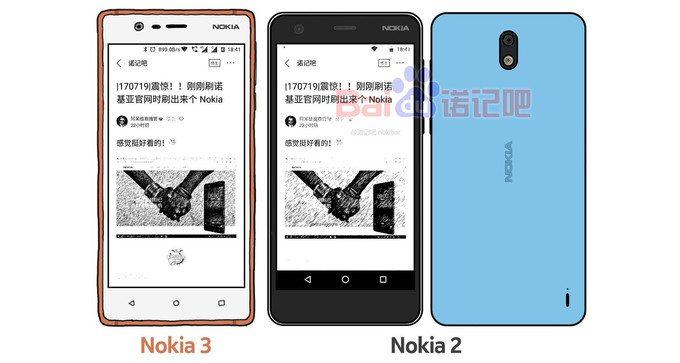 The images of Nokia’s new handset Nokia 2 got leaked online. Earlier this year phones like Nokia 3 and Nokia 6 were officially launched in India, and the phones are performing well in terms of impressing customers and in sales revenue as well.

But today we are not here to tell you the old story as the latest images of the Nokia 2 got leaked recently, the device is looking similar to that of the Nokia 3 at first glance but it is clear that the phone will be a downgraded version of the Nokia 3 or you can call it the entry level device from the house of Nokia.

A lot of leaks and rumors about Nokia 8 are already going viral on the internet, but it is expected that Nokia 2 will be announced along with the Nokia 8 at the launch event in London. Image shows a plastic design which looks basic and entry level as well, but the Camera placement and design tweaks are very similar to that of the other Nokia devices. The speakers can be seen at the bottom, the image was leaked on a website named as Baidu, and the credit of the leaks will go to SlashLeaks.

The phone is likely to come powered by an entry level Qualcomm Snapdragon 212 Quad-Core processor clocked at 1.1Ghz coupled with 1GB of RAM along with an Adreno 306 GPU for Gaming. It will offer 8GB of internal storage expandable up to 32GB’s via micro-SD card. It may come with a 2500mAh battery with a regular USB 2.0 port for charging. In the image, it can be seen that there is no Fingerprint Scanner in the front or rear. The phone will run on the Android 7.0 Nougat. For other specs, it might come with a 4.5(inch) HD IPS screen with a resolution of 1280 x 720 pixels. In the rear, it will house an 8MP AF shooter with LED Flash and in the front, will have a 5MP camera for selfies. No more details are available about the device as of now.