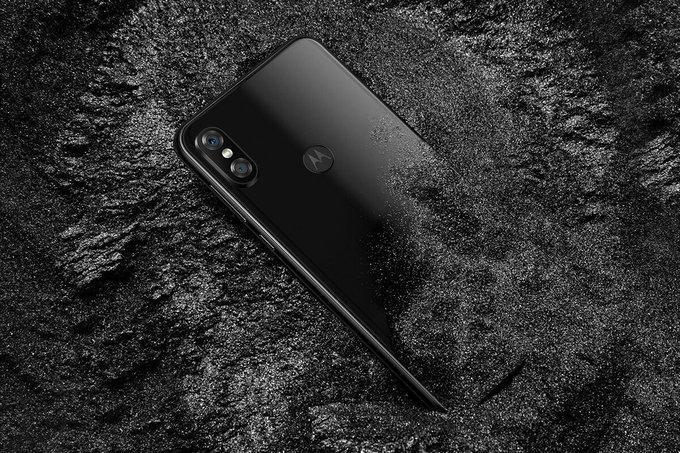 The Moto P30’s design might seem highly inspired from the iPhone X, but the market it is intended for; which is the Chinese market is obsessed with Apple iPhones. So, a low-cost iPhone X like phone, running Android is the right choice for that particular market if that sells well, Motorola or shall we say Lenovo here is trying to fill the market gap with the Moto P30. Even the official Motorola blog doesn’t feature this phone.

Now starting with the design well, you knew it a notched display, rear-mounted fingerprint scanner with Motorola batwing logo within it and the horizontal camera cluster sporting dual shooters. The device is a classic 2018 glass and metal sandwich, with the front being dominated by a massive 6.2-inch IPS LCD carrying 1080+ resolution with gorilla glass for protection. It does have a chin at the bottom sporting the full Motorola branding.

Under the hood, this packs mid-range specs as this is aimed for the budget users, who are seeking the iPhone like design for a fraction of price. So, running the show here is a Snapdragon 636 chip which is a reasonably powerful processor and has been already proved its mettle in the likes of Redmi Note 5 Pro, Asus max pro m1.

Moving ahead, the Moto p30 comes with an impressive 6GB RAM as well as a 4GB RAM model is also here paired with a large 128GB internal storage and 64GB is also available with the ability to expand up to 256GB via micro sd-card.

Ai Camera of the Moto P30

The Moto P30 sports a Dual-Camera setup with a dual-tone LED flash. The spec for the camera is the primary sensor is a 16 MP unit with f/1.8 aperture, while the second one is a 5 MP depth sensor to get those nice looking portrait shots that everyone wants these days. A 12 MP selfie snapper does the duty on the front, with the addition of an LED flash to light up your selfies in the dark.

Camera software will be handled by the ZUI camera app, which should offer portrait mode, along with face filters and usual Motorola camera tricks such as spot color mode, background removal and so on. The highlighting factor here is the assistance of AI while taking photos and when using face unlock. The Moto P30 does have a 3.5mm headphone jack and bottom-mounted speakers set.

Software on the Moto P30

However, you will still find the useful regular Moto additions such as Moto actions, Moto display, and voice,

It looks like Battery isn’t the main priority here as we have a decent 3000mAh power pack here with 18W Turbo Charging support. And this one should last you for a one full day, with like 5% remaining at the end of the day as this has to power a large 6.2-inch panel. And yes you should get that turbocharger inside the box.

The Moto P30 will be offered in Aurora paint job which is borrowed from the Huawei P20, while the other two colors are Super black and Ice white.

Pricing for the Moto P30 is quite affordable as this is aimed at budget seekers who want some flare of the iPhonish looks. The base model is priced at just CNY 1999 which translates into $290 US, while the top of the line 128GB/6GB variant is still priced very aggressively at CNY 2099 which means only $305, which is a sweet deal for what if offers.

This Lenovo P30 branded as Moto P30 could also be the Motorola One Power which as per the rumors is an Android One phone for the masses. However, we still yet to find what happened to the P30 Note and P30 Play as these models were also leaked before the launch of this device.