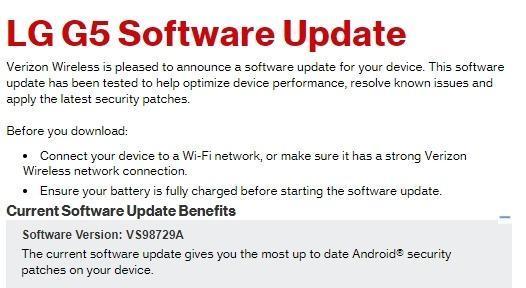 Verizon is notorious for its habit of rolling-out updates late, as the telecom-giant just recently pushed out an Android Oreo Update for Google’s Pixel and Pixel XL devices. That gives you an idea about the delays when you’re on Verizon. However, now the company has rolled out the latest August security patch to following trio its LG devices:

Following devices will get the latest security updates:

MUST READ: List of LG Phones that will possibly get the Android Oreo 8.X update.

Update for a Stylo 2 is pretty amazing in itself. As always the norm, these updates will be rolled out in phases region wise. So, do not panic, if you haven’t received it yet. And neither are this any major OS updates like the recent Android Oreo, so chill.

Moreover, if you’re eagerly waiting for the updates and didn’t receive the notification, then head on to Settings > About device > System updates to manually check the updates.

As always, this security patches brings the latest vulnerability fixes and any stability updates, if the OEM wishes so. It’s suggested that you keep at least 60% plus battery; to avoid any mishaps or connection problems when you’re over a WiFi connection.

A WiFi connection is always better than data, in case your carrier networks aren’t reliable in your area or you get slow speeds in your vicinity.