It is the time when everybody has been appreciating the Oppo’s Super VOOC 50W Fast Charging and now suddenly has just amazed the market with its new 100W supercharging Technology. Recently Xiaomi’s President and Co-Founder Lin Bin revealed this via a post on Weibo. He stated that the company’s engineers have been able to achieve a super 100W fast charging technology with time to charge a 4,000mAH battery from 0 to 100 to be only around 17 minutes. That’s nearly double as the Oppo’s Super VOOC Fast Charging technology. 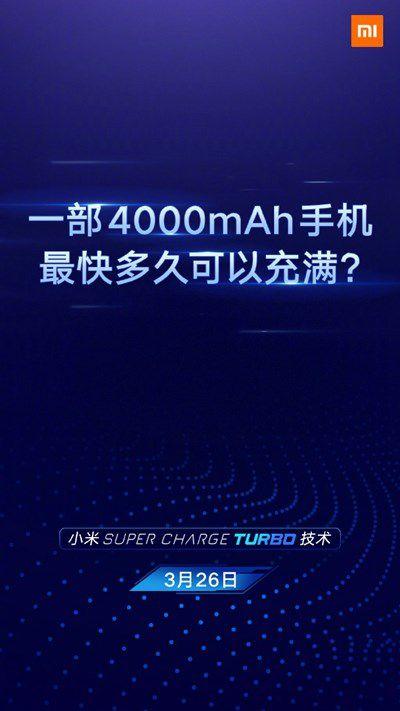 The Company has also posted a video on youtube showing show in 17 minutes the Xiaomi’s 100W fast charging can charge the phone only fully while the Oppo’s Super VOOC can charge only up to 65%. Also, the company has named the charging technology to be Super Charge Turbo.  It just took 7 minutes to charge the phone up to 50 percent. The OPPO’s smartphone with a smaller 3700mAh battery, in comparison to the 4,000mah, was charged to 65% at the same time that it took the Xiaomi phone to be fully charged.

Lin Bin had posted a video on Weibo showing off the capabilities of the 100W fast charging solution, at 20V/5A, which can top up a 4000mAh battery in just 17 minutes. After the launch of this, It will be Xiaomi’s charging tech with the leading current wired charging option against Oppo, which is the 50W SuperVOOC charging at 10V/5A.

Till Now Xiaomi has been offering fast charge speed only up to 27W and the Mi 9 is shipped with an 18W fast charger, hope Xiaomi plans to ship this with the Mi Mix 4. However, Xiaomi hasn’t revealed when this fast charging technology will be out for the public. Xiaomi has also stated that for “safety and efficiency”, the charging brick will be fairly larger than before. From 0 to 100% – I’d happily take the heavier compromise. In case the company has plans to commercialize the technology soon, consumers will likely have to pay out extra to purchase a Super Charge Turbo compatible charger for their phone. As mentioned earlier, we will need to wait until the official introduction of the technology in China on 26th March 2019.