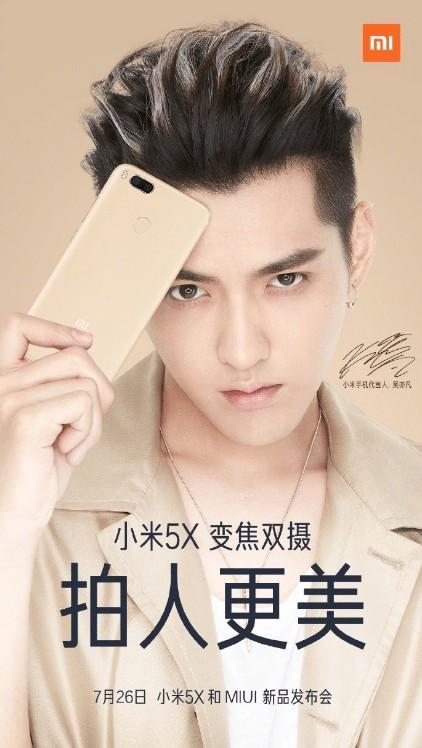 Even after the launch of the Xiaomi Mi6 Plus Flagship this month, Xiaomi is not done yet and still has some devices to show us this year. The news is that Xiaomi is getting ready to announce another Dual-Camera smartphone. The new phone is rumored to be aimed at the budget segment according to the expected specifications of the device.The Xiaomi Redmi Note 4 which features the same Snapdragon 625 Soc comes with a price tag of under $199, so we can expect the upcoming Mi5x to be affordable. The Mi5x set to be announced on 26th July 2017.

According to rumors, the Mi5x will be powered by a Qualcomm Snapdragon 625 which is a Legendary Octa-Core Soc with power efficiency like no other. In the memory department, we have 4GB RAM and 32GB storage. The front will be dominated by a 5.5-inch 1080 IPS LCD. As per the promo image, we can see a rear mounted fingerprint scanner. That dual camera setup, along with Dual LED flash on the left-most side. The teaser shows a rather rich Gold shade. A hybrid slot and the Mi5x will also come the latest MIUI 9 and is expected to run on the Android Nougat.

Xiaomi’s habit of under-cutting prices of their devices always brings the competition prices down as well. And now with the Xiaomi’s entry in the budget segment with the Dual-cameras could again shake the market. As Huawei did with its Honor 6x, we think Xiaomi will again dominate the competition with its Dual-cameras smartphones, starting with the introduction of the Mi5x in the budget segment.