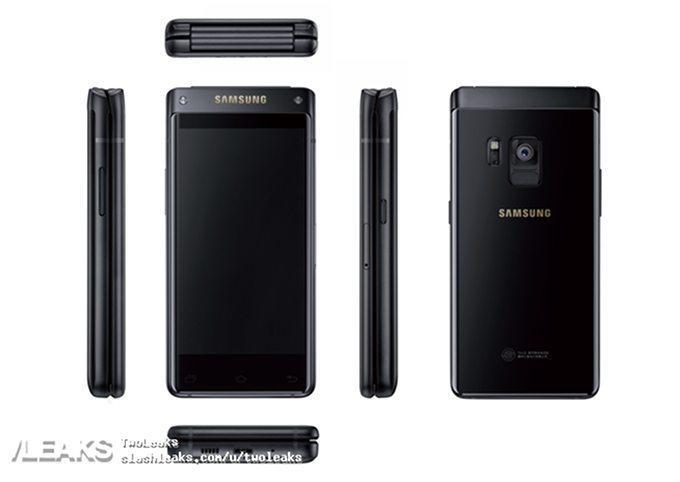 Samsung is preparing not one, but rather two top of the line Android flip phones for this year. As in east Asia, the flip phones are still in demand. Samsung has the sequel to the SM-W2017 which was a released last year. These are by no means ordinary flip phones but rather carry flagship specs and build.

Samsung now has the successor to the SM-W2017 which was a released last year. The sequel’s new renders are now leaked point out again the top of the line specs. The  Samsung SM-W2018 boasts all the latest bleeding edge silicon starting with the top of the line Qualcomm Snapdragon 835. The same processor which is inside the Galaxy S8. Memory department also has a solid specs with 64GB internal memory. And a whopping 6 Gigs of RAM, which is 2 GB more than last year’s model.

The display is rather small as expected for the flip phone but the resolution is not. A 4.2-inch display with Full HD resolution. As well as a 12-mega pixel primary camera and a secondary 5-mega pixel which will take care of selfies. The battery life is also expected to be the same as last years, featuring a 2300 mAh capacity.

The device will also come with wireless charging which even the iPhone lacks. The device has been certified by TENAA and FCC. Samsung’s main market for this device is in China, so it’s still unknown whether we will see this device any day in the western shores.

The South Korean tech giant is the only manufacturer remaining to launch such high spec-ed Flip-phone. The price of the device should be similar to last years, varying with increased storage options. More information about the device will appear in coming weeks.