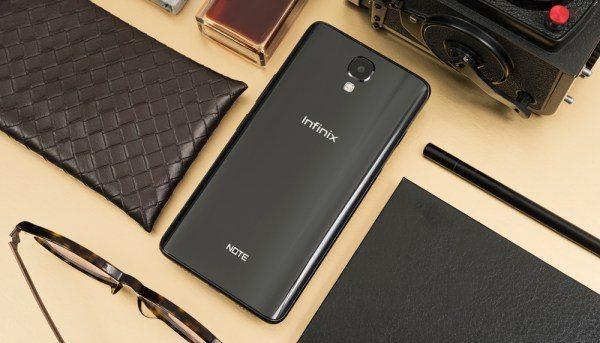 Infinix mobiles launched their two new smartphones in India known as the Infinix Note 4 and the Infinix Hot 4 Pro. Infinix made its entry today in India and in the first impression the brand is looking promising, the brand had its headquarters situated in Hong Kong and was started in 2012. It is a Chinese brand, and its biggest competitors are also Chinese brands like Xiaomi, Coolpad, OnePlus, ZTE, etc. Anyway, time will tell that how the brand performs in the upcoming few months.

The phone uses a MediaTek MT6753(64 bit) Octa-Core processor clocked at 1.3Ghz coupled with 3GB of RAM along with a Mali-T720 GPU for Gaming. It has 32GB of internal storage which is expandable up to 128GB’s through micro-SD Card. It comes with the latest Android 7.1.1 Nougat out of the box. The device measures 8.4mm in thickness and weigh around 198 grams.

In the Display fraction, it has a massive 5.7(inch) Full HD IPS screen with a resolution 1920 x 1080 pixels. In the photography aspect, it has a 13MP snapper with an LED Flash, and in the front, there is an 8MP camera for selfies and video calls. The phone sports a Fingerprint Scanner in the front below the display. The phone houses a 4300mAh battery. Its key features are- 4G connectivity, Bluetooth 4.2, GPS, Wi-Fi, FM Radio, etc. The phone is priced at 8,999 INR and will be available in Blue, Gold and Black colors.

This device is the less expensive of the two and is a Dual-SIM smartphone as well. It runs on the MediaTek MT6737(64 bit) Quad-Core processor clocked at a low 1.3 GHz with 3GB of RAM and a Mali-T720 GPU for Gaming. It has a 5.5(inch) HD IPS Screen with a resolution of 1280 x 720 pixels. The phone comes with the Android 6.0 Marshmallow out of the box, which is a bit outdated. The fingerprint reader is on the rear side.

Coming to the Camera part, it has a 13MP sensor on the rear with a LED Flash, while on the front you get a 5MP selfie shooter with a LED Flash as well. The dimensions of the phone are 8.8mm in thickness, and it weighs around 175 grams. The phone has a gigantic 4000mAh battery, and its key features are- 4G connectivity, Bluetooth 4.1, GPS, Wi-Fi, etc. The phone will be available in Gold, Red and Black color for a price of 7,499 INR. Both phones are aggressively priced and are appearing to be good on paper.